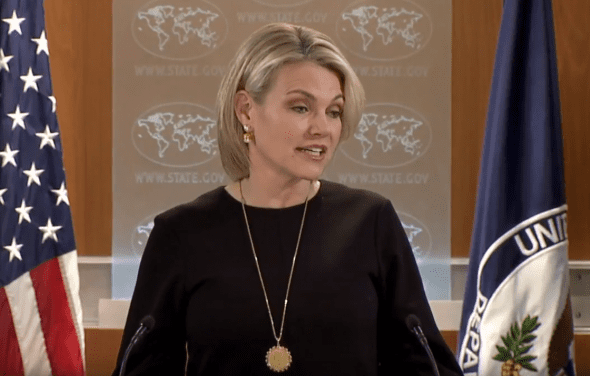 Nauert has been the State Department spokesperson since April 2017 after working as a broadcast journalist at ABC News and an anchor at Fox News.

Nauert is a Trump insider and has a great relationship with Ivanka Trump and her husband Jared Kushner.

“She’s been a supporter for a long time, and she’s really excellent,” Trump said of Nauert in November, when her name surfaced a likely replacement for Haley.

A senior administration official said, “Heather would be an astounding advocate for America at the United Nations. She is smart, she’s so hardworking, she never gives up working on behalf of American values.”

Nauert will have to face a Senate confirmation hearing and be confirmed by the full Senate.

Support Conservative Daily News with a small donation via Paypal or credit card that will go towards supporting the news and commentary you've come to appreciate.
Tags
Heather Nauert The United Nations Trump Administration