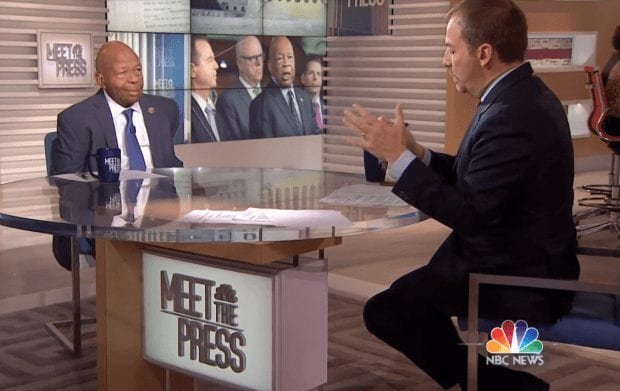 House Oversight Committee Ranking Member, and soon to be Chairman, Rep. Elijah Cummings revealed the incoming Democrat majority’s priorities once they run the committees in the House of Representatives.

Cummings first highlighted some of the investigations that he and fellow Democrats have planned.

“Keep in mind, Chuck, one of the things we’re concerned about in Oversight is the emoluments clause,” Cummings said Sunday on Meet the Press. “Wondering whether the president is acting in his best interest or those of the American people.”

Host Chuck Todd then asked how he would prioritize the huge number of subpoenas, and the ensuing investigations, that Democrats intend to charter.

“There are a number of subpoenas that we have requested, some 64,” Cummings admitted. “The American people said to us, through this election, we want accountability.”

“We want a check on this president of the United States,” he added.

Cummings then said that Democrats intend to take credit for some actions that the Trump administration has already been working on.

“A lot of our emphasis is gonna’ be on, and laser-focused on, things like the skyrocketing cost of prescription drugs,” he told Todd. “Dealing with things like .. issues like opioids.”

Both prescription drug pricing and the opioid crisis have been central issues to the Trump administration and Cummings comments show that Democrats intend to ride those coat tails all the way to 2020 while coming up with no platform of their own.

Todd then asked Cummings if he would allow the top Republican on his committee to have the same subpoena power he would. His eye-opening response is illustrative of Democrats’ view that bipartisanship is unnecessary and, in fact, undesirable.

“No! No,” Cummings admitted. “They who have power in Washington, have all power.”

“Our Democratic Party, although we may not have been elected by all the people, we’ve got to govern as though we were,” he added.

Support Conservative Daily News with a small donation via Paypal or credit card that will go towards supporting the news and commentary you've come to appreciate.
Tags
Elijah Cummings