NBC published an article Monday night that claimed to challenge Kavanaugh’s testimony under oath that he hadn’t heard of former Yale classmate Deborah Ramirez’s accusation against him before a Sept. 23 article in the New Yorker.

Ramirez accused Kavanaugh of drunkenly exposing himself to her at a party during college, though she herself was reportedly unsure if Kavanaugh was indeed the alleged flasher.

NBC cited text messages showing members of Kavanaugh’s team working to prepare a response to the unproven allegation before the New Yorker published its article. NBC presented the texts as evidence that Kavanaugh misled the public in his testimony. But the article (which has since been updated) was misleading for two reasons.

First, the network’s original story left out part of Kavanaugh’s sworn testimony in which he said he had heard Ramirez was “calling around to classmates” to ask if they remembered the details of her allegation. (To date, none of the attendees from the alleged party have yet corroborated Ramirez’s account.)

“They couldn’t — the New York Times couldn’t corroborate this story and found that she was calling around to classmates trying to see if they remembered it. And I, at least — and I, myself, heard about that — that she was doing that,” Kavanaugh told the Senate Judiciary Committee on Sept. 25.

Second, NBC’s portrayal of Kavanaugh’s comments — that he swore to have heard nothing of the story before it was published on Sept. 23 — clashed with the fact that Kavanaugh was quoted in that same Sept. 23 New Yorker article.

“Kavanaugh is quoted in the New Yorker story denying the allegation so of course he had heard about it prior to publication,” noted CNN’s Jake Tapper.

“Yeah. And I think any reasonable person would interpret “did you hear about this allegation between college and publication” to mean the 30 year interim period and not in the six-day lead-up to publication,” Aled “Squee” Griswold tweeted. 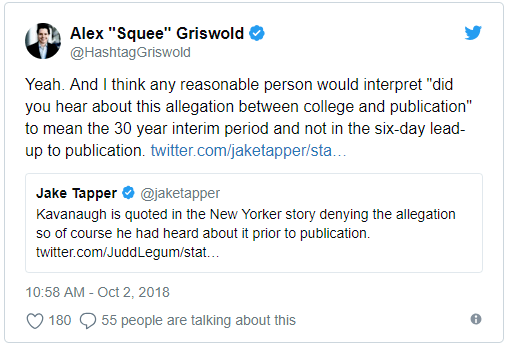 NBC faced similar scrutiny for reporting on Sept. 26 that the Senate was investigating a fourth allegation against Kavanaugh.

The allegation in question was an anonymous letter allegedly from a woman who claimed to have heard that Kavanaugh pushed his girlfriend “up against the wall very aggressively and sexually” as they left a bar in 1998.

The letter cited no evidence and provided the names of zero witnesses and was among multiple far-fetched claims about which Senate Judiciary Committee investigators asked Kavanaugh, as part of doing their due diligence.

NBC treated the letter as a newsworthy accusation, entitling its original story: “Senate probing new allegation of misconduct against Kavanaugh.”

Kavanaugh’s 1998 girlfriend, now a federal judge, wrote a signed letter to the judiciary committee the same day as the NBC story, disputing that Kavanaugh ever treated her the way the letter described.

“To the extent the attached letter is referring to me as the ‘friend who was dating him,’ the allegations it makes are both offensive and absurd,” Judge Dabney Friedrich wrote in the letter, which was first obtained by The Daily Caller News Foundation.

“At no time did Brett ever shove me against a wall, including in an ‘aggressive and sexual’ manner. When we dated, Brett always treated me with the utmost respect and we remain friends to this day,” Freidrich wrote.

“I have never observed (nor am I aware of) Brett acting in a physically inappropriate or aggressive manner toward anyone.”

NBC, which did not return an email seeking comment for this article, has not yet updated its story to note Freidrich’s signed statement challenging the anonymous, evidence-free letter.

NBC was previously criticized for publishing a Sept. 19 story that was based off a deleted social media post from a woman who claimed to have heard rumors during high school about an alleged incident between Kavanaugh and his first accuser, Christine Blasey Ford.

Christina King Miranda, an alumna of Ford’s school, cited no evidence for her claim and admitted having no first-hand knowledge of the event.

Miranda’s claim, moreover, was contradicted by Ford’s sworn testimony that she told nobody about Kavanaugh’s alleged assault until a 2012 therapy session. Miranda quickly deleted her social media posts after they went viral and garnered scrutiny.

To recap: Miranda presented no evidence for her claim; she admitted to no first-hand knowledge of the event; she deleted her claim before NBC’s article and her social media post clashed with Ford’s own sworn testimony against Kavanaugh.

NBC ran with the story anyway, treating it as a newsworthy development.

“A former schoolmate of the woman accusing Kavanaugh of sexual assault says she recalls hearing about the alleged incident,” NBC News posted on Twitter. 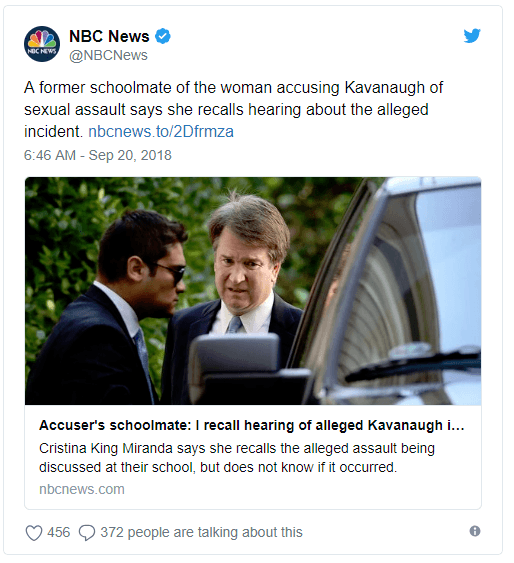 The Washington Examiner’s Becket Adams described the NBC article as “trash” and “the worst coverage of the news cycle.”

Shah argued that NBC and other establishment media outlets had lowered their standards in covering Kavanaugh for partisan purposes.

Republican South Carolina Sen. Lindsey Graham previously slammed NBC for its Kavanaugh coverage, labeling the network “a co-conspirator in the destruction of Kavanaugh from my point of view.”