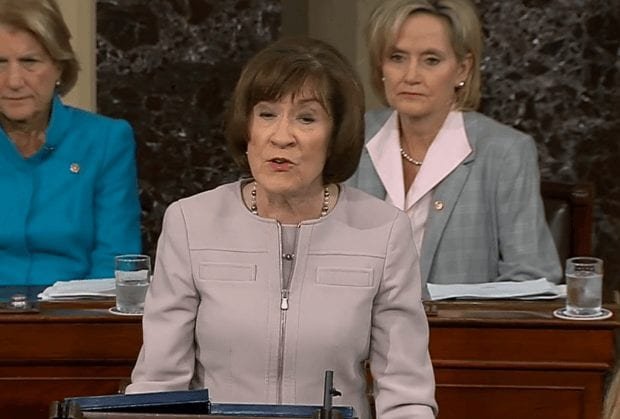 Speaking on the floor of the Senate, Collins spoke of the contentious atmosphere, dark money and special interest groups that instantly came out in opposition to anyone Trump nominated once Kennedy announced his retirement. Her speech began with disgust for the manner in which Kavanaugh’s nomination had been handled.

“The Kavanaugh nomination is where this process has hit rock bottom,” she said.

Collis said that she does not believe in using litmus tests where Supreme Court nominees are concerned that her evaluation focused on Kavanaugh’s 12-year judicial record.

“My duty, as a Senator, is to focus on the nominee’s qualifications,” she said.

Collins met with 19 lawyers, numerous personal acquaintances of the nominee, and Judge Kavanaugh himself twice while making her decision.

During her floor speech, she outlined the reasons for her support ultimately pledging to vote “yes” Saturday when the Senate holds the final vote.

Sen. Murkowski (R-AK) had already announced her “no” vote under pressure from tribal special interest groups in her home state. Her dissent put the fragile Republican majority in-doubt as Sen. Steve Daines intended to attend his daughter’s wedding on Saturday and would miss the vote. Collins became the most critical of all votes if Kavanaugh was to be confirmed.

Another factor in Kavanaugh’s favor is Sen. Joe Manchin’s (D-WV) support for Kavanaugh. Coming from a Trump +42 red state during a re-election year, Manchin had little choice when he called the White House Friday morning promising to back Kavanaugh. Trump’s recent “Make America Great Again” rally in Wheeling, WV likely did some damage to Manchin who was up only single digits against his Republican challenger in the last poll before the rally.

With Murkowski’s “no” balanced by Manchin’s “yes”, the 51-49 confirmation is all but set. Daine’s absence would narrow the vote to 50-49. In the case that Manchin reverses his vote, Daine would need to come in bring the vote to a 50-50 tie where Vice President Mike Pence would then use his vote to break the tie.

No matter what twisty path the vote takes, it appears that Brett Kavanaugh will be the next Justice on the U.S. Supreme Court.

Editor’s note: This article was updated to reflect the announcement that West Virginia Senator Joe Manchin (D) will definitely vote “yes” on Kavanaugh

Support Conservative Daily News with a small donation via Paypal or credit card that will go towards supporting the news and commentary you've come to appreciate.
Tags
Brett Kavanaugh Susan collins