Another major news agency says that they are unable to corroborate claims of sexual misconduct against Supreme Court Nominee Brett Kavanaugh.

NBC News said Tuesday that although they chose to air and publicize the interview with Julie Swetnick, the third woman to bring about unsubstantiated claims of sexual misconduct against Supreme Court Nominee Brett Kavanaugh, even though they weren’t independently able to find anyone else that could corroborate her story. 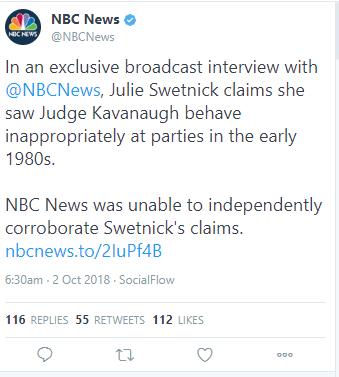 NBC’s comments make the second such story to be publicized by a news outlet despite a news organization admitting it could not find a second source to verify the claims being made by the subject of the interview. Last week the New Yorker published the claims of Deborah Ramirez despite admitting that they were unable to corroborate her claims. Separately, the New York Times refused to run that same story because they were unable to find anyone that remembered what she claimed to have happened.

News organizations are increasingly running stories that harm the reputation of conservative public figures without due diligence. To stop the abuse, those personalities will have to seek massive damages in defamation lawsuits against those organizations. Plaintiffs must only show that a reporter was grossly negligent in their reporting.