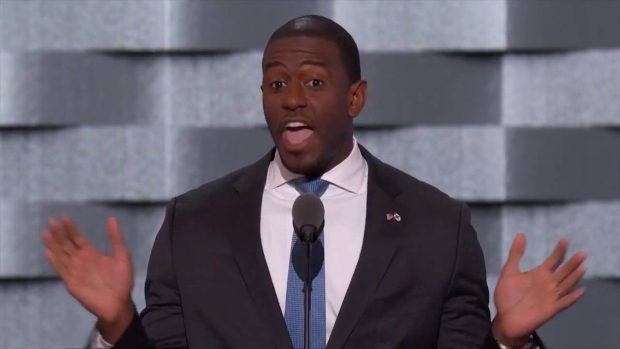 Democratic Florida gubernatorial candidate and Tallahassee Mayor Andrew Gillum was pressed by his Republican opponent in a Sunday debate on whether he would comply with an Immigration and Customs Enforcement (ICE) detainer request.

Gillum, who has called to abolish ICE, refused to answer the question regarding immigration, an increasingly notable issue in November elections.

“If they provide a detainer request will you honor it as governor? Will you work with Donald Trump, yes or no?”

Gillum didn’t appear to want to answer the question and shifted the topic back to DeSantis.

“You can proceed with your time,” Gillum said.

ICE places detainers on illegal immigrants who have been arrested on local criminal charges. The agency will take custody of the immigrant after he or she is released from local custody and then decide whether or not to deport the criminal.

“[If] there’s a detainer request from ICE, you turn [him or her] over to ICE or release [him or her] back into the community. Andrew will not answer the question. That tells me he’d be willing to release them back.”

President Donald Trump weighed in on the debate on Twitter, saying the Republican representative was victorious.

Ron @RonDeSantisFL DeSantis had a great debate victory tonight against Andrew Gillum, a mayor who presides over one of the worst run, and most corrupt, cities in Florida. Ron will build on the great job done by Governor Rick Scott. Gillum will make Florida the next Venezuela!

Gillum responded to the president’s tweet, saying he’s weak and that the U.S. deserves better.

He joined the list of Democrats calling to abolish ICE in July, saying the agency needs to be recreated to be more “compassionate.”

“I support a comprehensive immigration overhaul that includes abolishment of ICE in its current form to be replaced with a more compassionate and focused agency that actually keeps us safer,” Gillum said.

Support Conservative Daily News with a small donation via Paypal or credit card that will go towards supporting the news and commentary you've come to appreciate.
Tags
Andrew Gillum Florida the 2018 Midterm Elections