The fatuousness and fecklessness with which the mainstream media hypes the increasingly pointless “Russia Investigation” should lead any sentient person to sift the hyperbolic dross from fact, and dismiss the former. Either those desiring the truth are few and far between, or the mainstream media has completely abandoned its role as the “Fourth Estate” and has joined the ranks of the National Enquirer in chasing and promulgating conspiracy theories. Exclusively.

The facts regarding “Russian meddling” in the 2016 presidential election are readily available so this terse review is easily verifiable. So let’s look at exactly what Russia did, and what they didn’t do. What they didn’t do is perhaps the most salient place to start, for it also dispels the premises which most of the leftist political punditry, DNC spokespersons, and the mainstream media would have us believe. 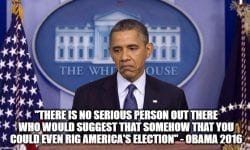 The Russians did not “hack” the election. It would be impossible to hack a national election for several reasons, many of which were explained by none other than our 44th President. In an October 18, 2016 press conference with Italy’s Prime Minister, Barack Obama said, “There is no serious person out there who would suggest somehow that you could even — you could even rig America’s elections, in part because they’re so decentralized and the numbers of votes involved. There’s no evidence that has happened in the past or that there are instances in which that will happen this time.”

Apparently there are a lot of “no serious persons” in the media and on the left, for that’s precisely what they’re maintaining. But not only are our elections conducted, tabulated, and counted on a local level, by county (of which there are 3,142), but the voting machines and counting machines are not connected to the internet in any centralized fashion. Thus, the system couldn’t be “hacked.” In short, the election results, and the votes themselves, were not tampered with or altered. And they were legitimized and made legal and binding when the reporting entities canvased and posted their respective results. Consequently, Donald Trump’s electoral success was legal and binding. He is the 45th President, whether one happens to like it or not.

But Obama did disclose perhaps the most egregious “tampering” the Russians engaged in during the campaign: they purportedly “hacked the DNC.” Please note: the DNC (Democrat National Committee) is not the election. The two are not synonymous. But even this is not verifiable, since the DNC wouldn’t let the FBI investigate the purportedly hacked servers.

The Hill, on January 10, 2017, reported on testimony given by then FBI director James Comey to the Senate Intelligence Committee. They stated, “The FBI requested direct access to the Democratic National Committee’s (DNC) hacked computer servers but was denied, Director James Comey told lawmakers on Tuesday.

The bureau made ‘multiple requests at different levels,’ according to Comey, but ultimately struck an agreement with the DNC that a ‘highly respected private company’ would get access and share what it found with investigators. ‘We’d always prefer to have access hands-on ourselves if that’s possible,’ Comey said, noting that he didn’t know why the DNC rebuffed the FBI’s request.”

The reason the DNC would not let the FBI investigate could be significant, but is only a matter of conjecture absent an official explanation. Russians, perhaps not even affiliated with the Russian government, were among those who apparently successfully hacked into the DNC server, including DNC chairman John Podesta’s emails.

A related, but wholly separate crime, was the hacking of then Secretary of State Hillary Clinton’s emails. You’ll recall, she chose to use her own unsecured server located at her home, rather than the official State Department email system. According to Julian Assange of Wikileaks fame, hackers from at least seven different countries successfully hacked into her server, which compromised national security with every email, especially those of a classified nature.

Just this week it was revealed that China successfully planted code in her server from day one of her tenure as Secretary of State. And as reported by the Daily Caller, “A Chinese-owned company operating in the Washington, D.C., area hacked Hillary Clinton’s private server throughout her term as secretary of state and obtained nearly all her emails…The Chinese firm obtained Clinton’s emails in real time as she sent and received communications and documents through her personal server, according to the sources, who said the hacking was conducted as part of an intelligence operation. Two officials with the ICIG (Intelligence Community Inspector General), investigator Frank Rucker and attorney Janette McMillan, met repeatedly with FBI officials to warn them of the Chinese intrusion.” 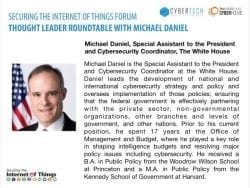 What is most troubling about all of this is the Obama Administration response. As reported in June, “The Obama White House’s chief cyber official testified Wednesday that proposals he was developing to counter Russia’s attack on the U.S. presidential election were put on a ‘back burner’ after he was ordered to ‘stand down’ his efforts in the summer of 2016. The comments were by Michael Daniel, who served as White House “cyber security coordinator” between 2012 and January of last year.”

If the Obama Administration and the Democrats were so worried about the Russian’s “meddling” in the election, why was the chief cyber official told to “stand down” on his efforts to curtail such hacking efforts? It’s just as inscrutable as the DNC’s refusal to allow the FBI to investigate their server!

So what we have so far is accusations that some Russians hacked the Clinton and the DNC servers. No “hacking” of the election itself, and after one and a half years of investigation by Robert Mueller team of HRC loyalists, still no evidence of any corroboration or “collusion” with the Trump campaign.

But there is one other thing the Russians did. As Newsweek reported in December, 2017, “Russia aggressively tried to hobble U.S. democracy during the 2016 election, and is still working to destabilize parts of the world with propaganda, according to National security adviser H.R. McMaster who also said Russia’s goal was not merely to undermine the election, but also our way of life.” 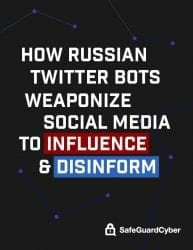 McMaster elaborated, “I believe that Russia was engaged in a very sophisticated campaign of subversion to affect our confidence in democratic institutions, in democratic processes, including elections,” he said during an interview with the BBC. “What they want to do is create the kind of tension, the kind of vitriol that undermines our confidence in who we are.” His comments echo a National Security Strategy document issued the end of last year which accused Russia of “using information tools in an attempt to undermine the legitimacy of democracies.”

This perhaps provides the single most significant clue as to why Russia (aside from all the other foreign actors who hacked the DNC and Hillary Clinton’s emails) would be “meddling” in our election process. Throughout 2016, prior to the election, Trump was given a rather generous 10% chance of success. Everyone, except perhaps Trump himself, was anticipating an HRC victory in November. How best to cast a shadow over her anticipated victory and the election process itself, than by showing the nation, and the world, that she had literally stolen the Democrat nomination from Bernie Sanders, and that she was cavalier with national security correspondence?

And frankly, it appears that there are other forces, much more visible and persuasive, when it comes to undermining our confidence in our electoral process. No one has done a better job of that than the Democrat Party and their propaganda arm, the mainstream media! What some Russians did pails in comparison with the continued accusations, aspersions, insults, and derision heaped upon our 45th President and his successful campaign, by the DNC and their media lapdogs.

So here are the facts. The election was not “hacked,” but the DNC and Hillary Clinton’s servers were, by multiple foreign entities. There is no evidence after one and a half years of investigation by an anti-Trump super-investigation team that Donald Trump had any involvement or knowledge thereof. And Russia’s efforts using social media and other information tools, to undermine our confidence in our electoral system are only surpassed by the efforts of the DNC and the mainstream media to do the same. Next time Russia tries to meddle in an election, they should hire them; after all, they’re much better at it!

Associated Press award winning columnist Richard Larsen is President of Larsen Financial, a financial planning firm in Pocatello, Idaho and is a graduate of Idaho State University with degrees in Political Science and History and coursework completed toward a Master’s in Public Administration. He can be reached at [email protected].

Support Conservative Daily News with a small donation via Paypal or credit card that will go towards supporting the news and commentary you've come to appreciate.
Tags
2016 Presidential Election Russia collusion