Although many conservatives have stopped watching the NFL as a result of its players’ actions during the national anthem arguing that kneeling during the anthem is the ultimate disrespect of the American flag, it is incorrect for them to argue that the NFL’s recent ratings and fall in attendance are solely due to the players’ anthem protests.

The NFL’s kneeling controversy has led conservatives to promote the notion of boycotting the league. The Trump administration has also supported this idea, which has led to the NFL’s anthem protests to become a political issue. Nonetheless, conservatives are mistaken in promoting the idea that NFL’s anthem protests are the only factor in the league’s recent fall in ratings.

While it is true that ever since Colin Kaepernick first started kneeling, the NFL has seen its ratings fall, correlation does not imply causation. Besides kneeling, there are many other factors behind this drop in ratings. Specifically, the NFL’s other failed policies, the declining popularity of the sport itself, and the success (and failures) of other American sports leagues during the same period. In reality, the popularity of American sports leagues is defined by the popularity of the sport itself, not its politics.

The NFL’s Other Problems

The kneeling controversy dwarves in comparison to the NFL’s other problems including problems with domestic violence amongst its players, penalties and game stoppages, low scoring games, CTE, endless commercials affecting the game length, to name a few. These problems have contributed to a varying degree to the NFL’s ratings woes. Furthermore, the reality is that the NFL was struggling with viewership before Kaepernick even started kneeling.

Football Not As Popular As It Used To Be

Another thing to consider when addressing the NFL’s rating fall is the declining popularity of football itself. The reality is that many Americans, especially the younger generation, are more interested in other sports, specifically basketball and baseball. According to ESPN, football is now the third most played sport amongst America’s youth, falling off from its previous number one spot.  According to the same study, America has seen an increase in kids playing basketball and baseball, with basketball taking the top spot and baseball coming in second. The reality is that football seems to be a thing of a past, with the median age of viewers consistently growing over the past couple of years to over 50 nowadays. The NBA, on the other hand, has a median viewer age of 42 and has seen a 14% increase in viewership from the 18-34 demographic just last year. In addition, basketball has also seen an increase in global viewership.

Politics are Irrelevant to League Success

NBA players, including the biggest stars such as Lebron James and Stephen Curry, have called out the Trump administration, using their popularity to promote their political views. However, this hasn’t stopped the NBA from seeing an increase in viewership. 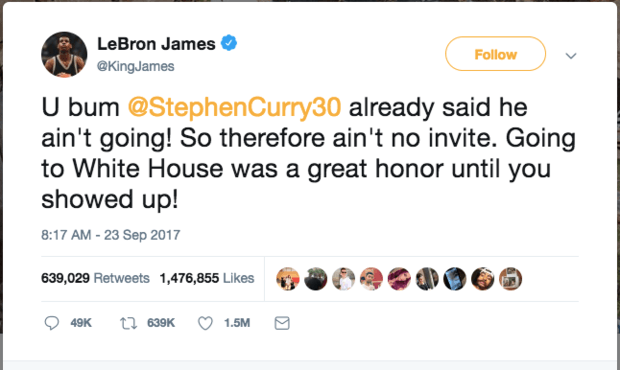 The truth of the matter is that Americans care more about the sport being played rather than the politics or controversy surrounding the players or the league. The NBA’s recent rise in popularity is not because of its players’ involvement in politics. It is largely due to its considerably different playstyle.  Unlike the NFL or MLB, the NBA has offered a fast paced, high scoring, highlight ridden games. Viewers are continuously taking into account the playstyles and pace of the sport when deciding what to watch, — not the politics.  While this makes for easy argument, it is unfair for conservatives to argue that the NFL’s viewership declines are due to its politicized kneeling controversy.  While Colin Kaepernick may have angered conservatives across the United States with his politics, he alone can’t be blamed for the NFL’s viewership fall.

Support Conservative Daily News with a small donation via Paypal or credit card that will go towards supporting the news and commentary you've come to appreciate.
Tags
The NFL