Michael Avenatti, the infamous Stormy Daniels attorney, has blown it again, this time by providing to Congress a witness on sexual misconduct by Supreme Court Nominee Judge Brett Kavanaugh that never actually saw any such thing.

Former Investor’s Business Daily Washington, D.C. bureau chief Paul Sperry sited Congressional sources that say that Julie Swetnick, Avenatti’s supposed witness, never saw Brett Kavanaugh do anything other than drink too much – a fact that he has stipulated and regrets.

“Congressional sources say new Kavanaugh accuser Swetnick can offer no eyewitness or other evidence to show the SCOTUS nominee participated in any alleged “gang rape” or forced himself on girls, and that she only personally witnessed him drinking “excessively” at parties,” Sperry tweeted. 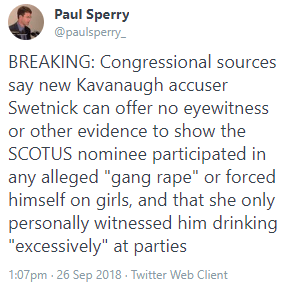 A statement provided to the Senate Judiciary Committee had said that Swetnick Kavanaugh and his buddy Mark Judge were at a party where she was drugged and gang-raped. Swetnick did not accuse Kavanaugh of the assault.

Avenatti’s witness not having actually ‘witnessed’ anything gets worse: she claimed that there are two or more other witnesses that could back her up … only, they didn’t see anything either.

Specifically, Swetnick said that there were at least two other people who could attest to the truthfullness of her claims, but just like the sworn statements from Christine Blasey Ford’s witnesses, the witnesses will only be able to say that she told them she was assaulted. They weren’t wherever this supposedly happened and never saw whatever was supposed to have occurred. This newest accuser appears full of more hearsay, more smearing, and zero evidence.

There are other problems with Swetnick.

First, she’s a full two years older than Kavanaugh which would have made her a sophomore in College at the time of the alleged parties. Who goes back to high school parties once they get to college?

Second, she said she went to 12 or so of these gang-rape fests. Why would you keep going back to parties that apparently center on sexual assault? There’s nothing smart nor logical about that claim.

Swetnick is likely the third “nasty woman” to bring unsubstantiated and likely false claims against Brett Kavanaugh and Avenatti’s attempt to line up her facts has made Ford and Ramirez’s claims look even flimsier than they already were.

Avenatti’s latest failure follows on the heels of another of his client’s case, this one against Donald Trump, appears about to be thrown out of court.

Judge S. James Otero said in U.S. District Court that a tweet the president wrote in April appears to be “rhetorical hyperbole” and speech protected under the First Amendment.

Avenatti has been and will always be an anti-trump showboat – and that will likely be his crowning achievement in life.

Support Conservative Daily News with a small donation via Paypal or credit card that will go towards supporting the news and commentary you've come to appreciate.
Tags
Brett Kavanaugh Julie Swetnick Michael Avenatti