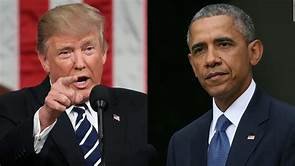 Members of former President Obama’s administration state that the current economic boom is a result of Obama’s policies. While that is partly true as every president is the recipient of the previous president’s policies, good or bad, the current economic boom is more from Trump’s policies. Trump removed 800 regulations that Obama imposed on everything and everyone. President  Trump also lowered the corporate tax from 35% to 21% thus enabling companies to come back here from overseas to build and hire more here.

An article appearing on Gateway Pundit showed that Barack Obama was the worst economic president since World War II and the first president in US history to never reach a single year of 3.0% annual economic growth. When we reached 2% under Obama he told us “that was the new norm.

** Obama had the lowest annual GDP growth rate of any President since World War II.
** US workers under Obama made less than they did when Obama took office. Average pay in real terms slumped 4 percent from 2009-14, according to the National Employment Labor Project.
** Labor Participation rate is stuck at a 38 year low.
** The percentage of working age Americans who are actually working has barely risen from the depths of the last recession.

On Thursday, during his cabinet meeting at the White House, President Trump took a shot at Obama and his failed economic policies.

Critics blasted Trump for his tweets saying that they are agitating and making them nervous. I say keep tweeting Mr. President.

Media critics are reporting that the Dems will receive up to 35 seats in the mid-terms. First of all, it is too early to determine who is going to get what. What they are trying to do is discourage Republicans from coming out since they will figure it is a lost cause which is what they want them to believe. This could also backfire on them since many Dems may not come out to vote since they figure they already have it. I agree with what Rush Limbaugh said the other day, “What happened in 2016 when everyone said Hillary would win hasn’t even emerged yet.”

Support Conservative Daily News with a small donation via Paypal or credit card that will go towards supporting the news and commentary you've come to appreciate.
Tags
Barack Obama the economy