Recently the Washington Pravda caused me to start thinking about lawyers. This is not a favorite topic. I resent the fact lawyers can file a frivolous lawsuit, on behalf of a dishonest client, and be completely untouched by any repercussions. On the contrary, they’re handsomely paid while aiding an injustice.

Meanwhile, the subject of the suit spends thousands fighting a lie. In most instances, even if he wins, he’s ruined financially. 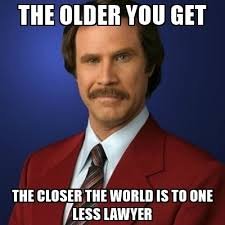 I can count the number of times I’ve hired a lawyer on the fingers of one hand. My first was an incompetent who didn’t understand the specific performance clause of a real estate contract. The second lawyer was hired 14 years later when I bought another house. In between I joined the Monkey Wards legal plan. (“Monkey Wards” is redneck for Montgomery Wards, once a retailing powerhouse rivaling Sears and J. C. Penny, but now existing mainly as a shrunken web retailer and occasional reference in opinion columns.)

The monthly fee entitled members to a one hour consultation on any civil matter, document reviews and stern letters written on my behalf to anyone who dared to cross me in a legal manner of speaking. If a problem needed more than one hour of legal advice, plan members go on the clock at what was guaranteed to be a ‘discounted’ rate.

That’s the entirety of my contact with lawyers as a client. It’s the total contact for most Americans.

What prompted this brief bout of soul–searching was the mention of the “Washington Legal Clinic for the Homeless” in connection with the demolition of a building near Washington, DC’s main homeless shelter.

A staff lawyer for the clinic supported a bill by Councilman Trayon White Sr. — the Maxine Waters–like political wizard, who’s convinced Jews control the weather. Before it was diluted by a thunderstorm, White’s bill would have required the city to put the homeless in new housing before demolition could begin.

My first thought was why on earth would homeless people need an entire legal clinic at their disposal? I could understand being on the lookout for doctors, cooks, haberdashers, carpenters and cobblers, but if I could get by for decades without paying for a lawyer, why do DC’s homeless need one for free?

Well, there’s that crime thing. In Portland, OR the homeless made up half the people arrested in 2017. That’s a lot of lawbreaking for less than one percent of the population. Homeless arrest percentages aren’t reported in DC, but regardless the clinic only handles civil matters, not criminal.

The organization has 15 staff members, 9 of whom are lawyers. Funding comes from donations and grants from the annual United Way charity drive and the Combined Federal Campaign.

So, what do these legal eagles do all day? The homeless, by definition, aren’t buying homes and I doubt their days are a whirlwind of wills and living trusts. That leaves news conferences and social justice, which is very expensive for the public.

The clinic’s existence, funding and social approval is a byproduct of what Russell Moore calls “moralistic sentimentalism.” Meaning someone sees a problem, decides the problem shouldn’t exist and makes it their goal to eliminate the problem. What they never do is ask what caused the problem in the first place. Moralists aren’t big on responsibility.

They feel sorry for the homeless and then use them as a blank slate to demonstrate their commitment to being a good person. Some of the sympathetic go to work for the clinic and others fund to it. With the ironic result that the homeless’ legal team is funded by the same people who can’t afford a lawyer of their own and whose lives are degraded by the clinic’s legal victories.

The homeless industrial complex likes to describe the homeless as “outcasts,” like it’s our fault they’re on the street. When the truth is many are on the street because they can’t obey simple rules, can’t resist drugs and alcohol or they are criminals.

Instead of building a society that reinforces cultural norms, organizations like the clinic employ the force of the law to coddle a tiny minority at the expense and safety of the vast majority. The only homeless who truly benefit are the handful that are power–washed before their brief court appearance as a token plaintiff.

The rest continue their downward spiral and the lawyers, as usual, suffer no repercussions.