The Social Security Administration (SSA) has given the American Federation of Government Employees (AFGE) about three weeks to turn in all government issued equipment and vacate the government offices the union is currently using, Federal News Radio reports.

The SSA gave the AFGE a hard date of July 31 to move out of agency office space and return all government-owned computers, phones and other equipment and supplies, according to an SSA email to AFGE obtained by Federal News Radio.

The Department of Housing and Urban Development issued a similar notice to AFGE, giving the union until mid-July to evacuate the department’s offices and turn in all government tools and resources it is currently using.

The AFGE has filed a lawsuit against the Trump administration for the May 25 executive orders. Several Democrat lawmakers have filed briefs in support of the union’s lawsuit. 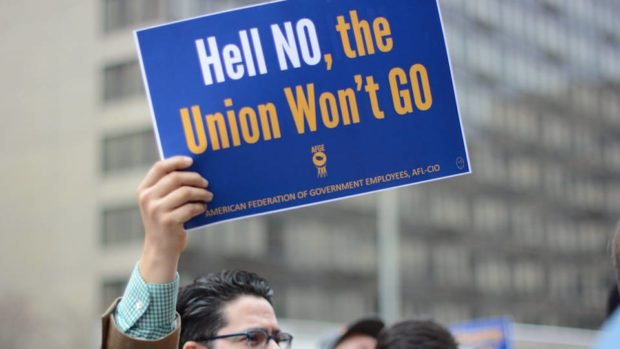 “The three executive orders President Trump issued May 25 are a direct assault on the Constitutional rights of federal workers and a challenge to the democratic principles on which this nation was founded,” AFGE national president J. David Cox Sr. said in a statement. “Many thanks to current Representatives Cummings and King and to former Representatives Clay and Leach for filing a legal brief opposing these illegal and unconstitutional directives.”

Support Conservative Daily News with a small donation via Paypal or credit card that will go towards supporting the news and commentary you've come to appreciate.
Tags
public-sector unions The American Federation of Government Employees