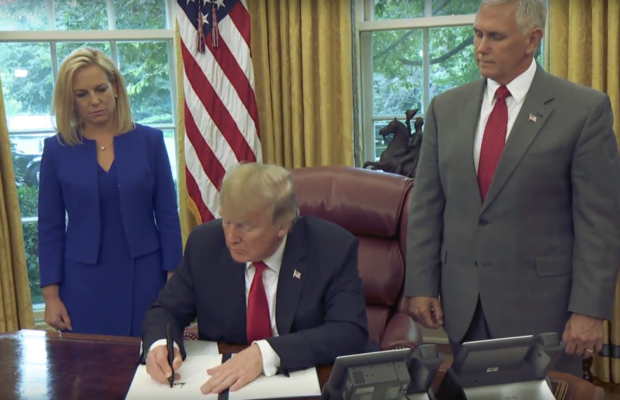 President Donald Trump signed an executive order Wednesday that seeks to end the separation of suspected illegal alien adults from their children while maintaining the administration’s zero-tolerance policy on illegal immigration.

The Executive Order Affording Congress an Opportunity to Address Family Separation attempts to end the necessity of separating suspected illegal aliens from their children by moving their trials ahead of other immigration cases, adding additional facilities and amending the Flores Consent Decree of 1997.

What Trump’s executive order addressing family separation DOES do:

It is the policy of this Administration to rigorously enforce our immigration laws. Under our laws, the only legal way for an alien to enter this country is at a designated port of entry at an appropriate time. When an alien enters or attempts to enter the country anywhere else, that alien has committed at least the crime of improper entry and is subject to a fine or imprisonment under section 1325(a) of title 8, United States Code. This Administration will initiate proceedings to enforce this and other criminal provisions of the INA.

This indicates that the Trump administration intends to keep the zero-tolerance policy on illegal immigration in-place.

Secondly, the order mandates that, as much as possible, DHS should detain suspected illegal alien adults with their children with few exceptions.

The Secretary of Homeland Security (Secretary), shall, to the extent permitted by law and subject to the availability of appropriations, maintain custody of alien families during the pendency of any criminal improper entry or immigration proceedings involving their members.

The Secretary shall not, however, detain an alien family together when there is a concern that detention of an alien child with the child’s alien parent would pose a risk to the child’s welfare.

Third, Trump’s E.O. orders the Secretaries of Defense and other executive departments to make available to DHS any facilities appropriate for the housing of suspected illegal alien families while they await trial.

The Secretary of Defense shall take all legally available measures to provide to the Secretary, upon request, any existing facilities available for the housing and care of alien families, and shall construct such facilities if necessary and consistent with law. The Secretary, to the extent permitted by law, shall be responsible for reimbursement for the use of these facilities.

Heads of executive departments and agencies shall, to the extent consistent with law, make available to the Secretary, for the housing and care of alien families pending court proceedings for improper entry, any facilities that are appropriate for such purposes. The Secretary, to the extent permitted by law, shall be responsible for reimbursement for the use of these facilities.

Fourth, Trump ordered the Department of Justice to file a request with the U.S. District Court for Central California to modify the Flores Consent Decree.

The Attorney General shall promptly file a request with the U.S. District Court for the Central District of California to modify the Settlement Agreement in “Flores v. Sessions”, CV 85-4544 (“”Flores” settlement”), in a manner that would permit the Secretary, under present resource constraints, to detain alien families together throughout the pendency of criminal proceedings for improper entry or any removal or other immigration proceedings.

Fifth, immigration trials that involve an adult with minor children will be prioritized so that accepted asylees are admitted into the United States and rejected asylees returned home as quickly as possible. This will likely result in delays for the remainder of immigration cases but should stem the tide of illegal aliens crossing with minors.

The Attorney General shall, to the extent practicable, prioritize the adjudication of cases involving detained families.

What Trump’s executive order on family separation does NOT do:

The order is NOT intended to be permanent

This order is obviously intended to be temporary. The president cannot allocate funds, only direct departments to use funds already allocated by Congress to service these requirements. Congress will have to act to authorize funding for additional facilities and immigration judges so that cases involving family units can be processed expeditiously.

This order does not re-instate catch-and-release

Liberals had intended the family separation outrage to trigger a return to catch-and-release. This order instead reaffirms the Trump administration’s intention to enforce existing immigration law.

Congress should immediately authorize funding that would double the number of immigration judges to deal with the massive increase in asylum claims. Handling these cases quickly and returning rejected claimants back to their home countries quickly will stem the tide of those wishing to overwhelm and bypass the U.S. immigration system.

Congress should immediately authorize funding for family detention centers along the border that will hold parents and children together. Legislation will have to include text to override the Flores Consent Decree so that separation no longer occurs.