The chairman of the Senate Homeland Security Committee is asking the FBI about “highly questionable” redactions in text messages exchanged between two bureau officials who worked on the Hillary Clinton and Trump campaign investigations.

In a letter to FBI Director Christopher Wray, Wisconsin Sen. Ron Johnson flagged several redactions in text messages, which he said the bureau made “without apparent legitimate reasons.”

Johnson singled out one October 2016 text message that suggested that FBI counterintelligence official Peter Strzok was locked in a battle with another government official over a secret surveillance warrant. In another July 2016 text, Strzok suggested that the FBI lacked the resources to conduct a thorough investigation of Hillary Clinton’s use of a private email server.

The messages were originally redacted when provided to Congress earlier this year, but members of Johnson’s committee staff were able to review less-redacted versions at the Justice Department last month.

Johnson asked Wray on May 11 to explain the “excessive” redactions in the text messages, which Strzok exchanged with former FBI lawyer Lisa Page.

Johnson, a Republican, met on June 7 with U.S. attorney John Lausch, who the FBI and the Justice Department tasked to handle congressional requests for documents related to the Clinton email investigation. Congress has also sought documents related to secret surveillance warrants that the FBI and DOJ obtained against former Trump campaign adviser Carter Page.

The text messages came to light during a Justice Department inspector general probe of the FBI’s handling of the Clinton email investigation. Strzok was removed from Special Counsel Robert Mueller’s investigation into Russian collusion because many of the messages showed he and Page mocking and criticizing Donald Trump.

In his letter to Wray, Johnson said the FBI has “slow-walked” document requests and has created “additional barriers for the Committee in exercising its constitutional oversight responsibilities.”

In one text message Johnson flagged, Strzok refers to an argument he was having with another person over a Foreign Intelligence Surveillance Act (FISA) warrant. The Oct. 11, 2016 text was sent just 10 days before the FBI and Justice Department obtained a FISA warrant against former Trump campaign adviser Carter Page.

Strzok was the top investigator on the Trump-Russia investigation, which was codenamed “Crossfire Hurricane.”

“Currently fighting with Stu for this FISA,” reads the unredacted text message.

An Aug. 5, 2016 text refers to a remark made during an inter-agency meeting about the newly formed Trump-Russia probe.

The message refers to a person named “L.C.” who, according to Strzok, said during the meeting that “the White House is running this.”

The message was sent several days after the FBI opened Crossfire Hurricane. “L.C.” has not been identified. 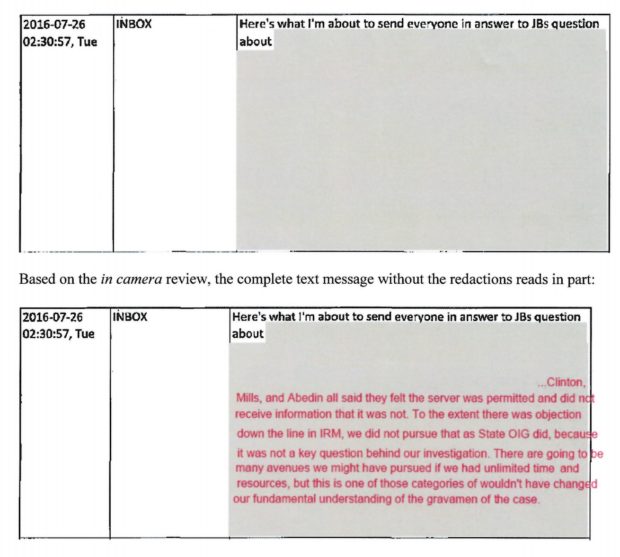 “These redactions included the names and what appear to be initials of Justice Department or FBI employees,” Johnson wrote in his letter. “Redacting the identities of these employees prevents the Committee from assessing the need to request additional documents relating to these employees or requesting interviews with these employees.”

Support Conservative Daily News with a small donation via Paypal or credit card that will go towards supporting the news and commentary you've come to appreciate.
Tags
Lisa Page Peter Strzok the FBI