It hasn’t been a good day for the liberal media. First, they reported that a child, separated from her mother near the border, was the victim of Trump’s zero tolerance policy. Then, ABC news convicted Paul Manafort of five counts of manslaughter. It turns out that they got all of it completely wrong.

First, ABC News flew a chyron with text indicating that Paul Manafort had pleaded guilty to five counts of manslaughter. There had been no reports that Mr. Manafort had gone on some unintentional killing spree but here’s what ABC stuck on the tube: 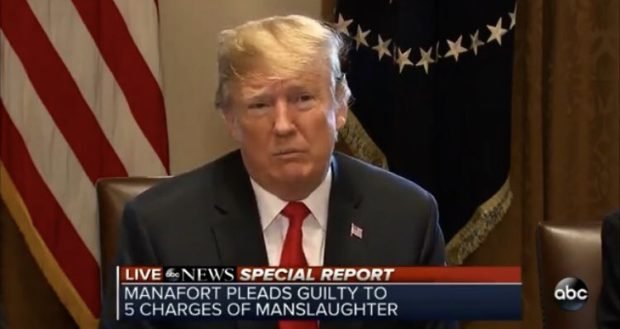 President Trump immediately criticized the report, knowing that it was little more than fake news.

Look what Fake ABC News put out. I guess they had it prepared from the 13 Angry Democrats leading the Witch Hunt! #StopTheBias pic.twitter.com/c0XOk1btEQ

ABC was forced to make a hasty apology after wrongly adding a deadly crime to Manafort’s troubles:

“We regret and apologize for the false lower third graphic that aired during our special report. We are investigating how incorrect information was in our system and how and why it was allowed to air,” ABC News tweeted. “We apologize to our viewers and to Mr. Manafort. There simply is no excuse for this sort of mistake.”

(cont.) We apologize to our viewers and to Mr. Manafort. There simply is no excuse for this sort of mistake. (2/2)

But, that wasn’t the first media report to be proven 100% wrong in the last 24 hours.

Support Conservative Daily News with a small donation via Paypal or credit card that will go towards supporting the news and commentary you've come to appreciate.
Tags
ABC News media bias Paul Manafort