As soon as Trump won the election it seems the entire media and the deep state had their collective minds triggered into insanity and rage against Trump. Their goal was to overturn the election and get their corrupt gal Hillary in there. After all, there was a lot of money and power to be made in that corrupt scam known as the Clinton Foundation. John Brennan especially, but Clapper’s not too far behind along with Sally Yates, are all in a pre-perp panic. They are doing everything to continue the distraction of the Russian collusion story to get away from where this is now headed, which is right at them and their ilk and people that were there and part of this. But now the tide seems to be turning and it is coming right back at them. I’ve always said when you hit Trump he hits back harder and that’s just what we are seeing.

It seems that the further they dig the more they find criminal doings perpetrated by the Obama regime, the DNC, The Hilldog, the Obama FBI & DoJ.  Their hole gets deeper and they get dirtier…if that’s even possible; they’re already lower swamp scum.

Now 11 Congressmen are demanding a new, special investigation into former Secretary of State Hillary Clinton’s role in funding the debunked Steele dossier — and that’s only the beginning.

The Apr. 18 letter is the first major move by conservatives in Congress to strike back against the so-called “Deep State” that President Donald Trump claimed is undermining his administration — and if the investigation is approved by Sessions, it would be a major victory for Trump voters.

The letter demands these former top government officials, all of whom worked under former President Barack Obama, be investigated because the Congressmen “believe that those positions of high authority should be treated the same as every other American.”

They included FBI Director Chris Wray and Utah’s Attorney General John Huber as recipients of the formal letter as well.

Further investigations into Hillary’s role into the debunked Steele dossier and her connection to the so-called “Deep State” could add serious fuel to the fire, and together it could finally bring down the hammer of justice down on the Clintons.

When Trump first announced at the beginning of his campaign that Obama had his phones bugged, all in the media laughed at him. Now they are singing a different tune now that it has been revealed that there was a deep state spy in his campaign and according to Representative Delvin Nunes there may be more than one.

President Trump has directed the Department of Justice to investigate the FBI’s counterintelligence investigation into the 2016 Trump campaign. This comes as the New York Times revealed last week that the same team that promptly exonerated Hillary Clinton and her team of wrongdoing were incorporated into an operation, code-named “Crossfire Hurricane” into the Trump campaign. This investigation will surely rock Washington.

I hereby demand, and will do so officially tomorrow, that the Department of Justice look into whether or not the FBI/DOJ infiltrated or surveilled the Trump Campaign for Political Purposes – and if any such demands or requests were made by people within the Obama Administration!

I hereby demand, and will do so officially tomorrow, that the Department of Justice look into whether or not the FBI/DOJ infiltrated or surveilled the Trump Campaign for Political Purposes – and if any such demands or requests were made by people within the Obama Administration!

The president also referenced an op-ed in Wall Street Journal that questioned Barack Obama’s role in the conspiracy, as the former president would have surely been aware of such a consequential investigation. In any event, Obama would owe the public an explanation of what he knew, or whether he knew it, during the investigation that involved the Federal Bureau of Investigation, the Central Intelligence Agency and the Foreign Intelligence Surveillance Court. President Trump likely has access to at least some of the information that such an investigation recovered, and seems to be hinting at a brewing scandal, as he says the FBI’s investigation is “bigger than Watergate”.

Now some in the media are waking up to what they’ve been missing for the past year and a half. The scandal that is bigger than Watergate, the scandal of the century and they were blind to it with their obsession with Russia, Russia, Russia and Stormy.  Stormy,  Stormy.  John Brennan and James Clapper were so self-absorbed in their partisan attacks on Trump they did not do their jobs protecting Americans around the world under Obama and are now panicking. As Michelle Malkin said today, “The biggest threat we face at home today is the three-headed hydra of the police state, the deep state and the fourth estate.”

The latest corruption in the swamp is with loudmouth Maxine Waters. One of Congress’ most corrupt members and reinvented #Resistance hero, Maxine Waters has come under intense scrutiny yet again after reports show she’s paying her daughter more than $100,000 in campaign funds this election cycle.

Citizens for Responsibility and Ethics in Washington (CREW), a liberal watchdog, named the California Democrat one of the most corrupt members of Congress in 2005, 2006, 2009, and 2011.

The Los Angeles Times has chronicled how her relatives made millions doing business with companies, candidates, and groups that Waters helped promote.

Citizens for Waters has already paid $42,862 to the congresswoman’s daughter, Karen Waters, since the beginning of 2017, FEC files show. The campaign is scheduled to pay the younger Waters another $65,000 for her “professional services” working on a “slate mailer,” according to the most recent FEC files.

Rep. Waters’s campaign debt to her daughter was first noted in April 2017 by the Washington Free Beacon. The campaign had yet to report any payments on the debt at that time. Since then, the campaign has reported nine payments to Karen Waters ranging from $3,000-$7,000, according to FEC files reviewed by The DCNF.

All these people, Hillary, Obama, Brennan, Clapper, Comey, Yates all belong in jail yet they roam free. Justice must be served or else it is true that we have a two-tiered government. One set of rules for the elites and one set for the rest of us. Just think if Hillary got in we would never have known any of this. 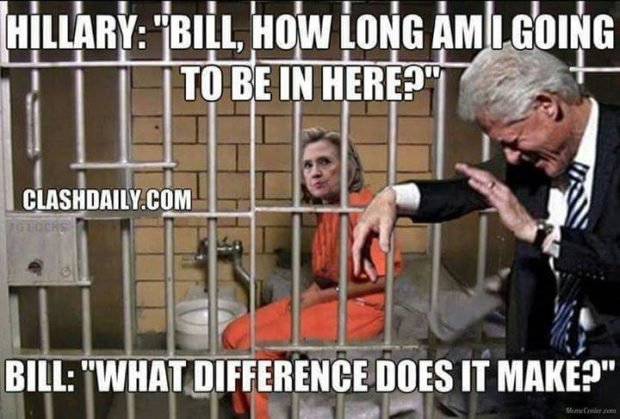 Support Conservative Daily News with a small donation via Paypal or credit card that will go towards supporting the news and commentary you've come to appreciate.
Tags
Deep State

Roe Is Dead. What Happens Next?

Berlin Air Lift: What It Was, Its Importance in the Cold War