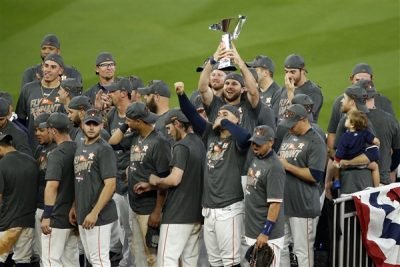 President Donald Trump will host the World Champion Houston Astros on Monday at the White House.

On Tuesday, the president will travel to San Diego, California to review the prototype border wall designs that have been tested in recent months and visit with members of the military. He will then travel to Los Angeles to attend a fundraiser. The trip, in the works for months, will be his first visit to the state during his presidency and the White House expects it to be a positive one.

Trump will travel to Missouri on Wednesday where he will visit a Boeing aircraft manufacturing facility to tout the success of his recent tax reform and the economy in what the White House is calling “a roundtable session.” While the president’s arrival at the airport is open to the public, the Boeing session is not. He will then attend a fundraiser for Missouri Attorney General Josh Hawley (R) who is hoping to face incumbent Senator Clair McCaskill (D) for that U.S. Senate seat in the general election.

The White House has not released any information for Friday, this post will be updated as information is released.

Support Conservative Daily News with a small donation via Paypal or credit card that will go towards supporting the news and commentary you've come to appreciate.
Tags
Politics The President's Schedule Trump Administration