Facebook is still using its “Related Articles” fact check feature to warn readers away from a satirical Babylon Bee article, nearly a day after it claimed to have rectified the mistake Friday.

Facebook mistakenly threatened the satire site The Babylon Bee with demonetization and reduced viewership after the left-leaning Snopes website “fact checked” one of its blatantly satirical articles Thursday. Facebook told The Daily Caller News Foundation that it had rectified the mistake Friday, but Babylon Bee Founder and Editor Adam Ford claimed readers were still seeing the article being fact-checked. TheDCNF has now confirmed that is the case.

The article titled “CNN Purchases Industrial-Sized Washing Machine To Spin News Before Publication ”was deemed false by Snopes Thursday. While Facebook has withdrawn the threat of demonetization, the tech giant is still wielding its fact check feature against the original article. 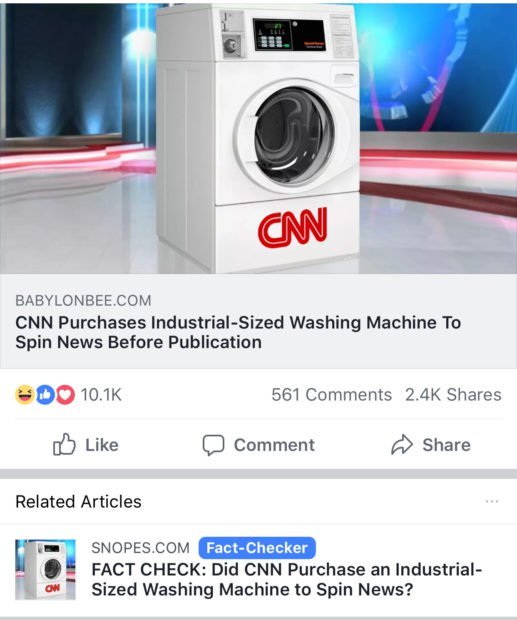 Facebook announced in December 2017 that it would use “Related Articles” to combat “false news” on its site. Facebook did not reply in time for publication to a request for an explanation from The Daily Caller News Foundation.

“There’s a difference between false news and satire,” Facebook said in its original statement to The DCNF. “This was a mistake and should not have been rated false in our system. It’s since been corrected and won’t count against the domain in any way.”

Support Conservative Daily News with a small donation via Paypal or credit card that will go towards supporting the news and commentary you've come to appreciate.
Tags
Facebook social media bias