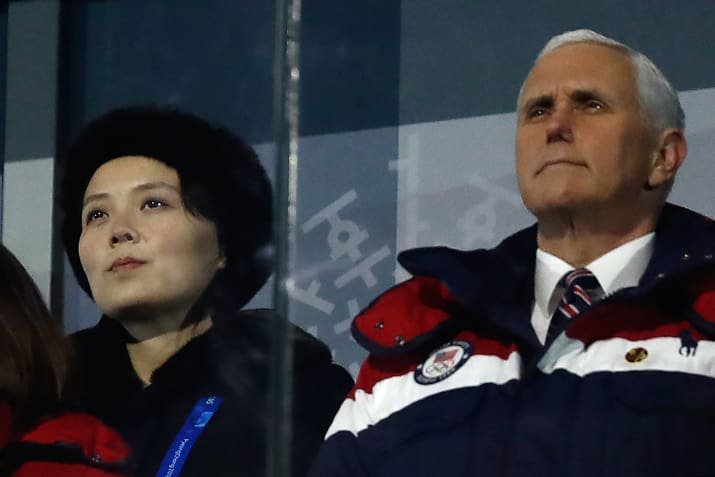 During the opening ceremony of the 2018 Winter Olympics on Friday, Vice President Mike Pence was seated near North Korean delegate Kim Yo Jong, who is Kim Jong Un’s sister. The media fawned over her and attacked Mike for not shaking her hand.

Michael Moore proclaimed his “love” for the “F Trump” attitude displayed by the North Korean contingent. Yo-jong was dubbed “the Ivanka Trump of North Korea,” and many regular Twitter users reacted with glee when they noted the “side eye” and “shade” she threw at Mike Pence during the opening ceremony.

As has now been well documented, the leftist media has not been able to contain their fawning admiration for North Korea. Some major outlets like CNN, The Washington Post, and ABC have raved that Kim Jong-Un’s sister (Kim Yo-jong is her name), and a group of North Korean cheerleaders, have “stolen the show” and grabbed “the spotlight.” NBC squealed that North Korea’s cheer squad (the “army of beauties,” as The New York Times referred to them) has been “so satisfying to watch.” Reuters claimed that North Korea has “won the gold” for “diplomacy” at the games. The Times, infatuated with Yo-jong’s smile, said that the U.S. has been “outflanked in diplomacy” by the communist regime.

CNN set a possible new low for themselves  Sunday morning when their Inside Politics panel of liberal journalists obnoxiously complained that Vice President Mike Pence didn’t shake the hand of Kim Yo-jong, Kim Jong-un’s sister and the head of the Propaganda and Agitation Department. “South Korea views this as a major milestone and a chance to see if an Olympics detente can bring a broader diplomatic opening, but the Vice President sees it as propaganda period,” bemoaned host, John King.

After playing a clip on Pence talking with NBC anchor Lester Holt and taking a strong stance against North Korea, King came back and seemed frustrated that the Vice President wasn’t playing nice with the regime that starves its own people and recently killed an American:

CNN gives more credibility to rocket man’s sister than the former North Korean guy at the State of the Union Address who escaped North Korea. CNN loves anything anti American!

The New York Times even praised Kim Yo Jong’s efforts at “diplomacy,” suggesting that with just a few smiles, she had “outflanked” Vice President Mike Pence.

As for Kim Yo Jong herself, she isn’t just a figurehead. The Sun reported that she is trusted enough by her brother — with whom she studied in Switzerland in the 1990s — that she has even filled in for him when he was sick:

In fact, she plays a major role in her brother’s regime and is a member of the politburo of North Korea’s all-powerful Workers’ Party. According to the New York Times, she is also the only member of the ruling family who appears on camera with her dictator brother.

In November 2014, Kim was named vice director of the Workers Party’s Propaganda and Agitation Department and became its head months later.

Her job is to pump out propaganda both venerating her brother and the North Korean state and discrediting enemies.

In 2015, a South Korean report said that between 2000 and 2013, almost 1,400 North Korean citizens were publicly executed, reportedly as a means to “keep the population in line.”

Thousands of North Koreans were required to witness firing squad executions in public stadiums in 2013, according to a South Korean newspaper.

Human rights campaigners with the European Alliance for Human Rights in North Korea say North Koreans have been sent abroad to work in jobs performing manual labor and have 90% of their pay sent back to the repressive state.

Amnesty International says more than 50,000 North Koreans have been sent to work in countries such as Angola, China, Kuwait, Qatar, and Russia. “Most workers were deprived of information about international or domestic labor laws and often lacked access in the host countries to any government agencies and other organizations monitoring compliance with or offering assistance in claiming labor rights,” according to the human rights group.

The regime is one of the world’s most repressive. It strips its citizens of all sorts of rights, including freedom of expression, freedom of information, and the freedom to move in and out of the country.

Almost all North Koreans are denied access to the internet, according to Amnesty, and they can be arrested and sent to prison camps if found with a smuggled mobile phone. International calls are also blocked.

“North Koreans are not only deprived of the chance to learn about the world outside, they are suppressed from telling the world about their almost complete denial of human rights,” said Arnold Fang, Amnesty’s East Asia researcher.

Some people have even been detained for watching foreign soap operas.

If that’s not enough here is a list of further atrocities they commit on a daily basis. These reporters should do some research before fawning over such a horrible regime as North Korea.  Maybe they should live there if they love it so much and partake of these speechless crimes and against the human race.

1) North Korea has actual concentration camps that are as bad as, if not worse than, Nazi death camps.

Hundreds of thousands of innocent men, women, and children are imprisoned and enslaved in these hellholes. The stories told by the few survivors who have managed to escape are horrific. They are beaten, stoned to death, starved, raped, tortured, and mauled by dogs. Sometimes they are forced to kill each other for the amusement of the guards. Prisoners eat rats and insects in order to stay alive. Pregnant women are forced to kill their own babies. About a quarter of the prison population dies every year, either from disease and starvation or execution.

2) While Kim Jong-Un grows ever fatter, his people are starving.

Over 70% of the North Korean population is undernourished or starving. Rather than make sure that his famished subjects are fed, Kim Jong-Un spends a quarter of the nation’s GDP on his military and nuclear arsenal (North Korea has threatened many times to destroy the United States with said arsenal). And the starving citizenry must worry that its already meager rations will be stolen by marauding soldiers, who are given carte blanche to loot as they please. Meanwhile, as most of the country lives in literal darkness without electricity, the pudgy dictator invests more and more money into building resorts and amusement parks for himself.

3) North Korea is the world’s worst oppressor of religious minorities.

About a quarter of a million Christians have gone missing in North Korea over the years, and currently there are around 50,000 languishing in prison camps. Communist countries never have any tolerance for religion, and North Korea is far from an exception to this rule. Christians fare the worst because their faith is considered foreign to Asian culture, so the small community of believers in the country are forced to meet and worship in secret. If they are discovered, they face not only political imprisonment but summary execution, enslavement, torture, and rape. In some cases, Christians have been tossed off bridges, trampled, crushed by steamrollers, and crucified.

Along with the methods already described, the crazed despot has also been known to perform executions via anti-aircraft missile. A defector reports that a number of musicians were killed this way. Other “enemies of the state” have been killed by flamethrower or mortar round. Jong-Un had his own brother assassinated with a banned nerve agent and his uncle shot to death by firing squad.

5) North Korean citizens were sent to prison camps for not being sad enough about Kim Jong-Il’s death.

After the death of the last Dear Leader, organized mourning events were held. Attendance was mandatory. Anyone who did not show up, or who showed up but appeared insufficiently distraught, was handed a prison sentence. This story sounds almost unbelievable, until you realize that this kind of thing is pretty par for the course in communist dictatorships. Aleksandr Solzhenitsyn told similar tales of life in the Soviet Union, including one about a guy who was given ten years of forced labor for being the first to sit down during a standing ovation for Stalin.  Horrifying Facts About North Korea That Our Fawning Media Seems To Have Forgotten | Daily Wire

This is something to keep in mind when you see footage of the North Korean cheerleaders. Their plucky little routines are very likely being performed with a literal gun to the head.

And if Pence was nice, they’d accuse him and the Trump administration of cozying up to a murderous Communist regime.

Reporters with no training, experience, nor knowledge of international relations nor diplomacy think they can opine on how the VP of the US should or shouldn’t behave with officials from other countries. The idiot leftist reporters at CNN are upset because Pence didn’t do the Obama with Little Kim’s sister.

This is Obama bowing to a North Korean mayor. That’s what CNN wanted to see VP Pence do.

And you have liberals going on and on about Obama “restored” respect for America around the world. As if they have a clue how to earn and maintain the respect of others. Here’s a hint: you don’t do it by bowing and scraping to everyone you meet!

It is no wonder CNN is referred to as The Communist News Network. This fawning up to North Korea and Kim’s sister certainly proves it.