This weekend the United States Treasury will bump up against the “debt ceiling.” This debt ceiling is to the government like the credit card limit is to your dreams of really furnishing your man cave. 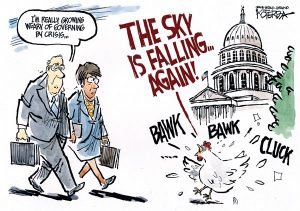 When your credit card is maxed out it’s no use going to The Big Screen Store to buy the new 90” TV for the Super Bowl. Your card will be declined shortly after its swiped. For the feds reaching the debt limit means the Chinese will get some temporary relief from Uncle Sam putting the bite on them for another series of loans.

There the similarity ends. You can’t borrow additional money until you either pay down your credit card debt or the postman delivers another credit card application that’s “reserved just for you!” Congress can start borrowing again just as soon as both houses pass a bill that increases the debt limit without any provision for debt payment. For politicians, operators are always standing by.

If the debt limit increase isn’t passed by this weekend the government enters “shutdown” mode and Trump will have to buy a burner phone to get back on Twitter. Or so the Opposition Media would have us believe.

The facts are these shutdowns were non–events until recently. Over the years there have been a number of shutdowns and the republic was none the worse for wear. Normal people went about their normal business, while the political class had a nervous breakdown.

The last time the government ground to a halt in 2013, Obama was in the White House and racial peace reigned throughout the land. Then the sinister Ted Cruz filibustered the debt increase and the feds were without funding for a harrowing 16 days. During that fortnight plus two Mexico annexed a defenseless Texas, the Bundy Gang seized much of the public land in Southern Nevada and rioting middle income taxpayers burned down Obamacare enrollment offices to protest skyrocketing insurance premiums.

You don’t recall that? That’s because it’s Fake News. Nothing much happened. It was so quiet the Obama administration decided to punish taxpayers by closing the Mall, national parks and other facilities that didn’t require closing. The goal was twofold: Generate hysterical shutdown news coverage and mobilize the dependent class to call a politician.

The truth is bumping up against the debt limit doesn’t shut off the money spigot. The feds are collecting tax money every day. Just before the Great Cruz Control Experiment the Washington Post published an interactive page where readers could take the $172.4 billion available even after the shutdown and decide who gets paid and who doesn’t.

There was no default. I even had $700 million left over for the odd drone strike or Congressional sexual harassment settlement. That’s why you won’t see that mistake in the Post again. The facts undercut all the shutdown predictions of doom.

Republicans took the blame for the Cruz Control, but suffered no lasting ill effects. In this season’s shutdown follies one would think that even the Slinky–spined Republican leadership in the House and Senate could win a confrontation with Democrats.

The difference between the two sides is stark.

On one hand the GOP is trying to keep the government up and running under the sure hand of legislative ‘mastermind’ and Curator of the Senate, Mitch McConnell. On the other, leftist Democrats are threatening to hold taxpayers hostage by shutting down the government. They believe rewarding illegal alien lawbreakers is more important than serving the citizens that elected them.

RINOs and herd–followers in the Swamp have trouble pointing out this obvious contrast because they can hardly wait to surrender to Democrat demands for a DACA amnesty. It’s just taking longer to negotiate terms than they expected.

The fact Trump won the presidency on a promise to “end DACA,” build the wall and deport illegals has escaped the notice of these serial appeasers. What citizens believe is only important until the polls close.

In all the OpMedia buildup to the potential shutdown, I have yet to read of any Democrats fearing they will be blamed for the shutdown. Like General Grant on the second day of a battle, they would have to more pretty fast to get ahead of the GOP jellyfish caucus who is already trying on their hair shirts.

Republican ‘leaders’ and their enablers are always willing to resort to preemptive surrender before the battle is joined. To win one must fight and their heart just isn’t in it. They always have an exit strategy for everything but leaving office.