Twitter and its big brother, Facebook, proclaim they are “platforms”, not content providers, but as they continue to curate, mold and, in some cases, hide certain traffic, they look more like heavy-handed censors every day –  and it’s dangerous.

Twitter and Facebook have taken every precaution to avoid the label “media company” or “content provider.” Instead, they both assert that they are “platforms,” but why the distinction?

Both companies project a vision that they should be viewed as open and free spaces for people to express their views and that only the most dangerous voices should be culled. This perspective colors the social media giants as little more than global-scale forums for which the owner has no responsibility or say on its content. Nothing could be further from the truth.

“At our heart we’re a tech company; we hire engineers. We don’t hire reporters, no one’s a journalist, we don’t cover the news,” Sandberg said.

Facebook does not want to be viewed as a media company, which would bring a responsibility to the truth and potential accusations of bias.

This differentiation allows them to censor content without consumers realizing that they are being fed a certain perspective, eerily similar to how propaganda operations conduct business. The social media giants say they are open platforms while acting as editorially-biased media agencies. Just because they “don’t hire reporters” doesn’t mean they aren’t censoring or pushing certain ideologies.

Investigative journalists found that Twitter has no intention of playing fair, balanced or anything remotely close. When asked about ideological speech they don’t agree with, staffers at Twitter admitted that they constantly and aggressively work to push those voices out of the conversation.

“We’re trying to downrank it … we’re trying to get the shitty people to not show up,” Twitter’s policy manager for trust and safety told an undercover reporter.

The aggressive hatred of Trump supporters is prevalent across the technology company.

Twitter has twice tried to refute the reports from Project Veritas, but the video is compelling.

At one point, former Twitter Content Review Agent Mo Norai told PV that “as a company [Twitter] you can’t really say it because it would make you look bad, but behind closed doors are lots of rules.”

The most controversial of tactics alleged by current and former Twitter employees was the use of “shadow banning” or the technique of preventing an account’s followers from seeing their posts without letting the account owner know that those posts are being censored.

“One strategy is to shadowban so that you have ultimate control,“ former Twitter Software Engineer Abhinav Vadrevu said. “You ban someone but they don’t know they’ve been banned, because they keep posting, but no one sees their content.”

“So they think that no one is engaging with their content, when in reality, no one is seeing it,” he added.

Shadow banning is a form of technological fascism. The definition of fascism includes the “forcible suppression of opposition” which Twitter’s tactics clearly enact.

The mainstream media has said next to nothing about Twitter’s oppressive tactics while Independent, Conservative and Libertarian press is heavily focused upon it. Is Twitter’s oppression of oppositional views really a big deal?

When a Twitter direct messaging engineer was asked if the bulk of Twitter’s filters were set against Conservative or Liberals, he had an interesting response.

“I would say majority of it are for Republicans, because they’re all from Russia…” Wow!? Someone – other than Nancy Pelosi – seriously believes this crap?

Any “platform” that censors one view and silences others is no platform at all. It’s a media company with an editorial line and ideological bent that should be transparent to its consumers. A platform that has to hide behind semantics, should question its motives and Twitter’s engagement in these tactics is dangerous.

A sect only silences the ideas of its opposition when its own ideas have little merit, cannot stand the test of scrutiny and would not be accepted but for brute force – or its technological equivalent. 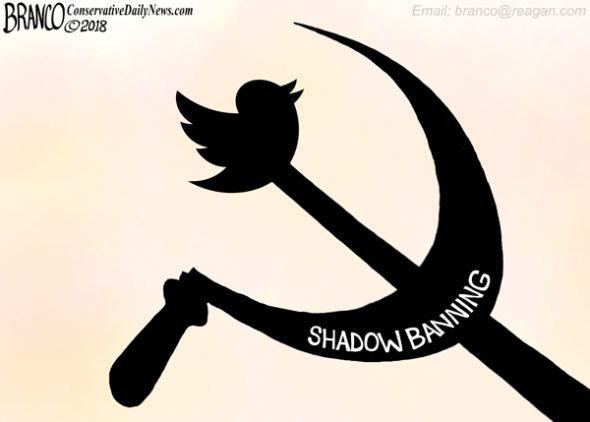 Here Are All The Companies Fleeing Crime-Infested Chicago