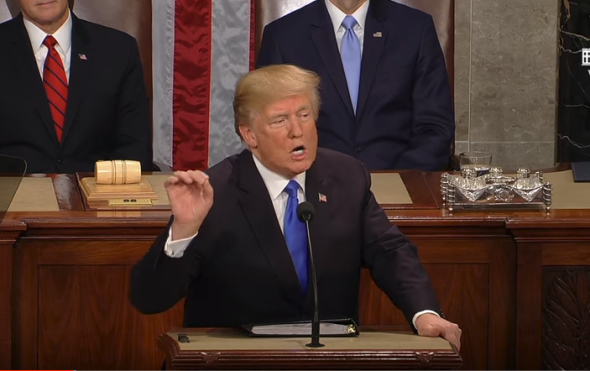 “Our country is strong because our people are strong.” So said President Trump as he gave his first State of the Union speech and it was a rousing, uplifting speech citing all the positive things his administration has accomplished for America. He was interrupted by applause 150 times while democrats sat on their hands. Pelosi frowned at his calls for unity and Democrat head Luis Gutierrez left the room when chants of USA, USA broke out. They know they don’t have anything to offer except hate Trump.

There were many emotional and tear-jerking moments during the speech as Trump introduced the parents of two young girls who were brutally murdered by MS13gangs which Trump has vowed to get rid of and is accomplishing. There was the young North Korean boy who had a train run over his legs while stealing a piece of coal and escaping to South Korea. He now has one artificial leg and still holds onto his crutches as a reminder of what happened. He now broadcasts from Seoul South Korea into North Korea telling them of the dangers posed by the Kim regime. Trump also introduced the parents of Otto Warmbier who was a student from the University of Va. on a school tour in North Korea and was arrested and tortured for stealing a poster. Otto died a few days after they returned him to America. There were others Trump introduced like the brave soldier who saved his friend in Iraq when a bomb went off on the second floor of a hospital they were trying to clear and a fireman who saved 44 children from the fires in Calif. Trump also thanked the brave men and women who helped out in the recent hurricanes in Texas and fires in Calif. and noted the people who sacrificed themselves and protected others in the Las Vegas shooting.

Trump explained his new tax cut saying that companies are now coming back to this country and building new plants here in every state and this tax cut is the largest in history and will double the standard of living. Because of this cut starting next month people will see their paychecks increase and a single person will have a $12,000 dollar deduction for a single person $25,000 deduction for a married couple on their taxes while the business tax rate will be cut down from 35% to 21% and small business can cut 20% off their taxable income.

Trump mentioned that right before the speech he signed the VA Accountability Act which gets rid of 1500 workers who don’t care about our vets and hire those that do.

Trump also talked about rebuilding our infrastructure saying it took one year to build the Empire State Building and now takes ten years just to get a permit for a road. He asked Congress for a 1.5 trillion dollar infrastructure bill.

One of the most concerned moments everyone was waiting for was in his plan for immigration. Trump cited four points: 1) Provide a path to citizenship for 1.8 million people who were brought here by their parents. They can begin a 10 to 12-year long process to citizenship with a good criminal history and work record.

Trump urged both parties to get the job done.

Joseph Kennedy 111 gave the Democrat rebuttal. He’s young and looks like a Kennedy but his speech was virtually the same thing Trump said but he tried using it against Trump. He talked about caring for our brave vets (which Trump did). He talked about how Americans help one another in fires and hurricanes (which Trump said) and he talked about how Democrats won’t forget the forgotten men and women (which they did during the Obama years and why people elected Trump and who Trump is now helping out.) He talked about how Americans must have a decent living wage which Trump mentioned and told how people will notice an increase in their paychecks starting next month. Kennedy’s whole speech was about 20 minutes and went on mostly like that. A carbon copy of Trump’s speech only attacking Trump and making it sound like it’s the Democrats who care. It was a typical lib speech all emotion and no facts. He sounded more like a college kid giving a campaign speech not someone in his thirties. The only thing different was he mentioned how Russia is knee deep in our democracy which is total BS. A democratic talking point based on the false premise that Trump colluded with Russia which we are finding out more and more each day isn’t true and was totally fabricated by the Democrats, Hillary and the deep state. Nice try Joe, but it’s back to the drawing board for you.