U.S. workers will not leave work very far behind – if at all – during the week of December 25, according to Robert Half’s holiday survey. Eighteen percent of workers plan to work the entire week. Of the 67 percent of workers who will take at least part of Christmas week off, 64 percent will check in with the office while they’re out.

One-third of employees plan to take the entire week off. Sixty-one percent of this group say it’s because their organization closes for the week; 79 percent of them note their firm pays employees during the closure. For people who plan to work, 81 percent expect to be at least somewhat productive. More than 1,000 people throughout the country were surveyed in October. 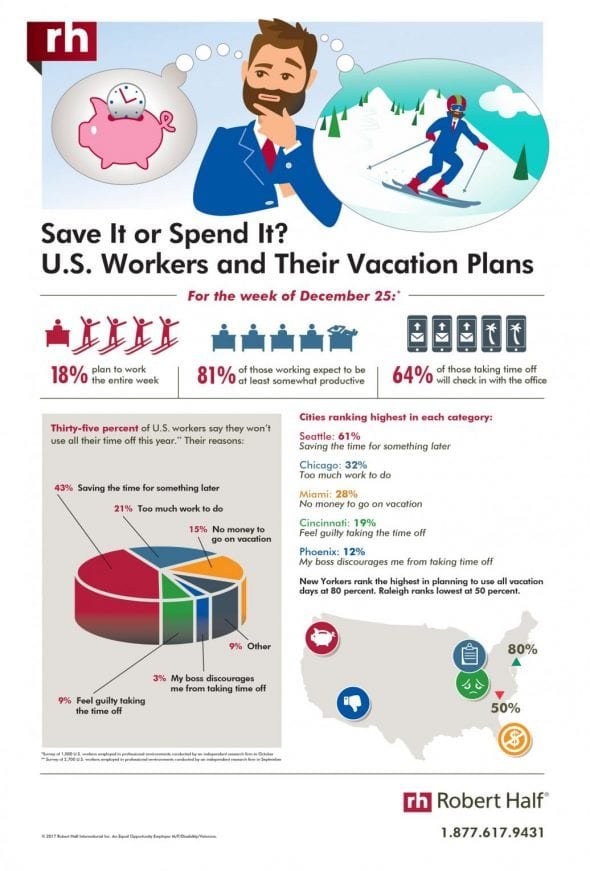 Does the end of the year mean workers reach a zero balance on vacation time? Not necessarily, according to a separate Robert Half survey of 2,700 people from 27 major U.S. cities. Thirty-five percent say they won’t use all their time off this year. Why not? The reasons vary.

Workers were asked, “What’s the primary reason you don’t use all of your vacation time?” Their responses:

Here are the highlights among the 27 cities:

Paul McDonald, senior executive director at Robert Half, offers the following points for workers and managers: