The New York Federal Reserve on Friday raised its estimate for fourth-quarter GDP closer to 4% after revisions of earlier data showed a stronger economy than previously thought.

The N.Y. Fed’s “Nowcast” forecasting model predicts that the economy is expanding at an annualized rate of 3.98 percent in Q4 – a .6% increase from last week’s 3.92% estimate. 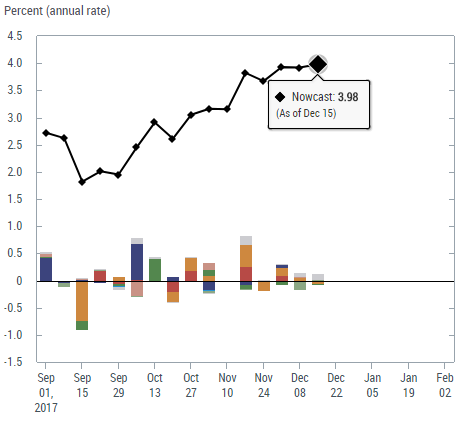 The regional central bank said that first quarter estimates were also revised upward to 3.15% from 3.12%.

The Atlanta Fed’s “GDPNow” forecast on Thursday was raised to 3.3% from the previous week’s 2.9 percent forecast adding credence to the New York analysis. Strong consumer spending is cited as the main driver for the increased economic activity.

The two regional banks estimates align with a just-released survey of consumer optimism that showed near-record enthusiasm for the economy.

The CNBC-America Economic Survey of 800 adults showed that 41% of those polled said they expect the economy to improve over the next year, nearing an all-time record.