A new survey released Monday showed that Americans feel better about the economy now than at any point in recent history.

The CNBC-America Economic Survey of 800 adults showed that 41% of those polled said they expect the economy to improve over the next year, nearing an all-time record.

The poll also found that more than half of respondents rated the economy as good or excellent – a result not seen for at least 11 years. 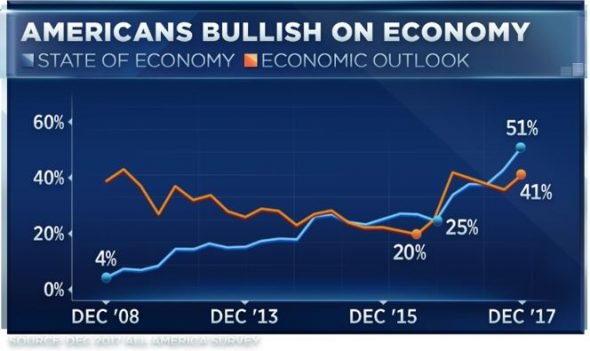 “We’re not measuring a marginal change in the economy, we’re measuring a different economy,” said Public Opinion Strategies’ Micah Roberts, a pollster for the survey. “”2017 is the year that Americans finally put the recession behind them in terms of their attitudes about the economy, and it took a change in leadership.”

Those asked largely attribute the economic optimism to President Donald Trump as they pushed his approval rating up 4 points in comparison to the September survey.

Progressive propaganda on tax reform is likely what is keeping the president from receiving higher approval numbers. The constant misinformation campaign from Democrats who assert that middle-income earners won’t see a tax cut actually have the majority believing that tax cuts will be bad for them. Recent polls show that 70% believe their taxes will stay the same or increase.

Experts widely expect that once the president’s tax reform is signed into law and American workers see their paychecks rise that Trump’s approval ratings will skyrocket. As the tax cuts fuel increased consumer and business spending, GDP growth could exceed 4% propelling the president to his highest ratings ever.

If Congress can pass the reconciled tax reform bill in the House and Senate this week and get it to the president for signing, the IRS has stated that the new tax tables would go into effect for February paychecks instantly increasing the paychecks for working families.

The Pain and Pleasure Principle