“We have multiple deputies down,” the Douglas County, Colorado Sheriff’s department reported early Sunday after those officers had responded to a disturbance call.

The incident occurred at 5:13 a.m. MST Sunday as deputies responded to the Copper Canyon Apartments for a domestic disturbance call. During the investigation, shots were fired. Five Douglas County deputies and 2 civilians were shot by the suspect. One deputy has died from his injuries. The suspect was shot, is believed dead and no longer a threat, according to the Douglas County Sheriff’s Department.

#Breaking: we just heard gunshots in the distance. Police are now closing Colorado at otero. We are moving to the media staging area. @DenverChannel pic.twitter.com/7sZi7LjBiP

UPDATE, we have multiple deputies down, no update on their status. The scene remains active and please avoid the area.

The sheriff’s office also told local TV news station KKTV that the situation is “not looking good for us.”

“We are not giving numbers or status at this point, we are still working on getting the suspect in custody,” Deputy Jason Blanchard told The Denver Post. 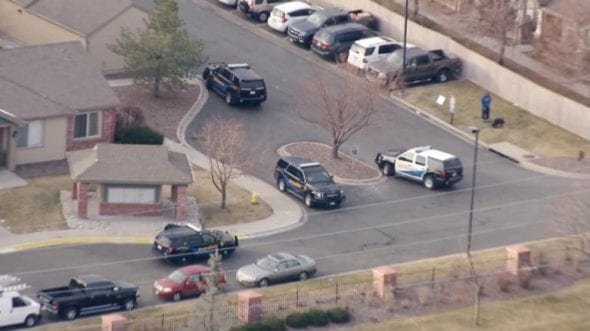 Residents who have not been displaced by the incident are being told to shelter in place and avoid windows as the scene remains active others are being directed to a shelter that has just been setup.

“Due to the size and scope of this investigation an emergency shelter has been set up @ East Ridge Rec Center, located at 9568 University Blvd. in Highlands Ranch,” the Douglas County Sheriff’s office said via Twitter. “If anyone has been displaced from their homes due to this event please feel free to head there.”

A Code Red was sent out regarding this incident. Any citizens in the affected area are instructed to shelter in place, avoid windows and stay away from exterior walls. pic.twitter.com/RgutCEqgJA

This is a developing story and will be updated as events warrant.

Support Conservative Daily News with a small donation via Paypal or credit card that will go towards supporting the news and commentary you've come to appreciate.
Tags
Colorado Douglas County Sheriff Shooting