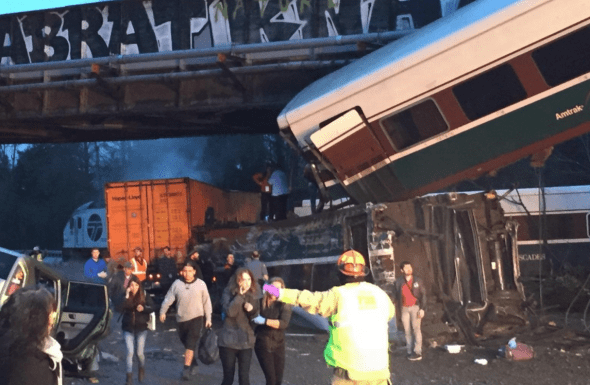 A high-speed Amtrak train has derailed in Pierce County, Washington where a massive emergency response is ongoing. (This is a breaking story and will be updated as events warrant.) At least 77 people from the train and from vehicles on the interstate have been transported to hospitals. Four have critical injuries and at least three people died in the crash. 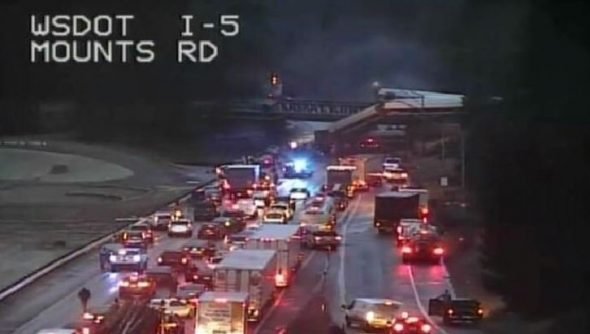 The lead engine and several train cars crashed onto the interstate below an I-5 railway cross-over bridge near Dupont, Washington at approximately 7:30 a.m. PST Monday. Law enforcement is coordinating a “mass casualty” response. 78 passengers and 5 crew members were reportedly on the train at the time of the accident and some motorists on the interstate were also injured.

One train car is dangling off the overpass while another appeared to be upside down on the interstate. Some reports state that at least three other cars had left the tracks and gone into the woods. A law enforcement official said that the accident “wasn’t survivable” indicating that injuries will likely be serious and fatality figures could be staggering.

Amtrak train derailed just south of Dupont. Emergency vehicles came immediately. Happened about 50yd before I was involved in it. pic.twitter.com/jMMVFvngjr

All southbound lanes of I-5 are closed and officials have no estimate for when they may re-open, but they warned that it could take the rest of the day if not multiple days to clear the scene. Washington State DOT is asking motorists to avoid the area.

This will be an extensive closure. Make sure you follow @WSDOT_Tacoma & @wspd1pio for updates on the derailed train blocking all lanes of SB I-5. https://t.co/3crytKq9En

Some reports say that the train may have struck something which caused the derailment, but aerial photos don’t immediately show anything but the heavily damaged train cars. The front locomotive is on the interstate with train cars off the track behind it and the “pusher” engine, that would have been at the rear of the train, is still on the tracks. Of the 12 passenger cars and 2 engines included in the train, 13 jumped the track. 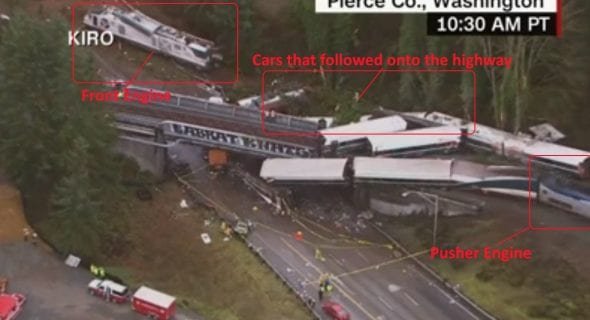 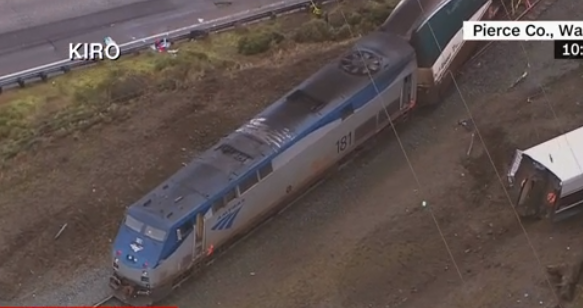 The train is #501 which was taking its first trip along a brand new route to the Tacoma Dome Station. The tracks had been in-use by other trains before the accident and Amtrak had been testing high-speed trains on the tracks for almost a year before allowing passengers aboard.

Lakewood, Washington Mayor Don Anderson said earlier this month that grade separations – such as overpasses – should be included to keep the new high-speed trains away from cars and pedestrians.

“Come back when there is that accident, and try to justify not putting in those safety enhancements, or you can go back now and advocate for the money to do it, because this project was never needed and endangers our citizens,” Anderson said.

#Amtrak train 501 last known speed before derailment was 81mph according to their real-time location service. pic.twitter.com/Tm1qgQKPGX

Another high-speed Amtrak train derailed near Steilacoom, Washington in July where 267 passengers were injured.

Amtrak Cascades Train 501, operating from Seattle and Portland, derailed south of Tacoma, Wash. There were approximately 78 passengers and five crew members on board. Initial reports are that some injuries are reported to passengers and crew, and taken to local medical facilities for treatment.

Individuals with questions about their friends and family on this train should call (800) 523-9101.  Local emergency responders are on the scene.

Service from Seattle to points north and east is continuing to operate. Amtrak Cascades Trains 504 and 509 are cancelled. No alternate transportation will be available.

Additional updates will be provided when available.

Amtrak regrets any inconvenience. This information is correct as of the above time and date. Information is subject to change as conditions warrant.

Support Conservative Daily News with a small donation via Paypal or credit card that will go towards supporting the news and commentary you've come to appreciate.
Tags
Amtrak train wreck Washington