Scott Daugherty of the Virginian-Pilot has discovered a lawsuit that may make a conservative folk hero out of the lawyer/plaintiff.

Bob Heghmann, a 70–year–old retired lawyer who lives in Virginia Beach, VA, has filed a lawsuit in federal court charging the national and Virginia Republican parties with more than simple bad faith failure to repeal Obamacare, as Republicans had promised voters for over seven years. 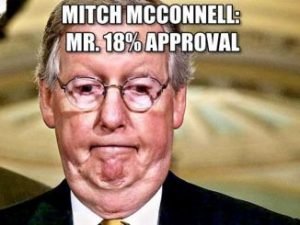 His lawsuit contends Republicans “[have] been engaged in a pattern of Racketeering which involves massive fraud perpetrated on Republican voters and contributors as well as some Independents and Democrats.” Heghmann believes the parties and national GOP leaders raised millions of dollars in campaign funds from trusting voters “while knowing they weren’t going to be able to overturn…Obamacare.”

As far as Heghmann is concerned that’s prima facie racketeering.

Morton Blackwell, a Virginia GOP national committee member named in the lawsuit, issued a two-edged response to the filing. Blackwell began by denigrating Heghmann’s call for legal accountability. He described the case as a “frivolous, nuisance suit that should be thrown out of court by any judge.”

Then he followed up with a statement that sounds more like an amicus brief than a condemnation. “[Blackwell] argued that ‘progressives’ had taken over the Democratic Party and seemed to lament that ‘conservatives’ had not yet taken over the Republican Party.”

Heghmann struck while the outrage was hot, filing just a week after Curator of the Senate Mitch McConnell failed to pass an Obamacare repeal–only bill. It’s Heghmann’s belief Republican fundraising should be just as accountable to donors as any other commercial money-raising effort.

Republicans could have repealed and replaced Obamacare with two–page bill. But the leadership never intended to do it…

Heghmann says, “Republicans could have repealed and replaced Obamacare with two–page bill. But the leadership never intended to do it. They want government control of healthcare because as far as Republicans and Democrats are concerned it’s their way of balancing the books.”

It’s Heghmann’s belief he can strike a blow for an outraged conservative base because he’s been a contributor, although not to the Virginia GOP or the RNC. The dangerous section of his suit is where he demands the political arms refund donor’s money if Obamacare isn’t repealed.

By his calculations, the RNC raised more than $735 million and Virginia Republicans took more than $20 million to the bank between 2009 and 2016 using the repeal of Obamacare as leverage to open wallets around the country.

If a promoter raised almost a billion dollars and promised to build an energy plant and then didn’t even break ground, he would be guilty of fraud in spite of the fact he’s also probably a green energy advocate.

So why shouldn’t politicians who promise much and deliver nothing be held accountable, too?

That’s easy, just like DC politicians exempted themselves from Obamacare, they also made sure they’re not legally actionable for lying to the public. However, that exemption doesn’t apply to the state and national committees and that’s where Heghmann gets his leverage.

I don’t want to bankrupt GOP, I want GOP to do what it promised to do…

His first hurdle is surviving an expected motion to dismiss the lawsuit. If Heghmann makes it past that milestone, he has some interesting requests for the judge. He wants to limit the jury pool to Republicans who are both registered and voted and are aware of national issues. His contention is a jury of his peers in this instance is an informed and voting jury.

His goal is not really to obtain refunds, “I don’t want to bankrupt GOP, I want GOP to do what it promised to do.” Heghmann explains, “Money is leverage to get them to do what they are supposed to do.”

Mostly Heghmann is a “full supporter” of Trump who is fed up.

In their view, the people made a mistake when they elected Donald Trump and the establishment is as interested in seeing Trump fail as Democrats are…

As far as he’s concerned, “Establishment Republicans have in effect repudiated the results of the last election. In their view, the people made a mistake when they elected Donald Trump and the establishment is as interested in seeing Trump fail as Democrats are.”

Heghmann just wants the GOP to “support Trump’s agenda.” He has a better chance of getting the money.

You can follow Heghmann’s lead without going to court. Simply attend the next town hall meeting of your GOP Senator or Congressman and demand a campaign contribution refund due to failure to perform.

Should you know other contributors, stand up together and demand refunds in unison. If your politician is too gutless to won’t hold a real town hall meeting, then hold a refund news conference outside his district office when he’s back home.

I doubt you’ll get your money back in either event, but the embarrassment and bad publicity generated for the Obamacare betrayers will be priceless.