One doesn’t have to be perpetually disgruntled to work in the Opposition Media, but it certainly helps. Not every Democrat operative disguised as a newsman can be assigned to the White House, but that doesn’t mean those unfortunates who aren’t can’t contribute to increasing the national vague sense of outrage. 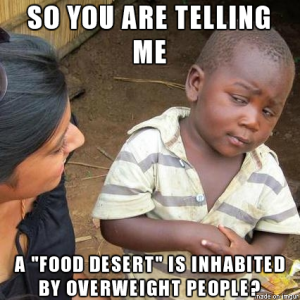 The Washington Post is filled with stories designed to do just that. Recently the Metro section introduced readers to yet another artifact of our corrupt national system: “D.C.’s grocery gap reflects city’s income divide.”

Now don’t make the mistake I did and assume this is another hunger story. Hunger has been vanquished more thoroughly than Al Gore! The War on Hunger is the only successful social program in the history of Democrat handouts. I defy you to visit a school, mall, theatre, bus station, airport or stadium and find undernourished people.

America is now the land of the over-nourished.

Even the kids, we’re told, are one English muffin from disaster and must, therefore, eat free breakfast and lunches in government schools are fat. Gyms do a booming business because America is fat. Try this experiment and see if you don’t agree: The next time you go to a mall count the number of people you see who aren’t chewing.

Government bureaucrats and non–profit compassioneers have noticed this worrisome trend. The government compassion gravy train doesn’t attract the type of employee who will march in a Victory over Hunger parade through the streets of New York and then go get a real job. They prefer to redefine the mission and keep the tax dollars flowing.

That’s why instead of stories about hunger, we read about “food anxiety.” That’s a term that covers everything from genuine deprivation to worrying about a gas station burrito. The War on Food Anxiety is so nebulous its participants never have to worry about victory being defined. Traveling alongside “food anxiety” in the mission creep cavalcade is the concept of the “food desert.”

This doesn’t refer to a genuine desert like the Mohave where there is no food. “Food deserts” are a snob’s wasteland, like my old home in Odessa, TX, where there are no upscale groceries and people can’t pronounce “quinoa.”

The WaPost story was something of a hybrid. The Post sniffs, “In 2016, nearly 70 percent — or 34 — of the city’s 49 supermarkets were in four wards that are predominantly white and have the District’s highest household incomes, according to the review by D.C. Hunger Solutions, a nonprofit advocacy group.”

This combines Bernie Bro suspicion of capitalist motives with segregated geography paranoia. In this instance call it “whitebread privilege.” As Beverley Wheeler, director of DC Hunger Solutions, warns, “Grocery-store access is a racial equity issue that must be dealt with, and it’s a health issue. We can no longer pretend we don’t see what we see.”

So what is it they are seeing? Duck hunters are notorious for going where the ducks are. Retail merchants, which includes grocers, are equally notorious for building where the money is. It’s not a black thing, it’s a green thing. For the same reason, one doesn’t find many Harris–Teeters in Appalachia.

And what good would it do residents of Wards 7 and 8 in DC to have a grocery store where they couldn’t afford to shop? At one time I defined wealth as being able to shop at Sutton Place Gourmet without worrying about the final tab. But I didn’t torture myself by walking up and down the aisles admiring groceries I couldn’t afford to buy.

Are there benefits to envy of which I’m unaware?

Companies look for average income, crime rates, transportation access and available real estate. This makes choosing the site of a grocery store is about as impersonal as statistics can make it. The decision is not based on a whim like choosing the headquarters for the corporation. Those usually land within a short drive or helicopter jaunt from the Chairman’s favorite home.

Frankly, I don’t see how convincing the people she purports to help that their grocery stores are second–class is going to improve morale in those wards. Wheeler is quick with complaints and the Post is eager to amplify, but this strikes me as a “problem” that won’t find a solution.

Support Conservative Daily News with a small donation via Paypal or credit card that will go towards supporting the news and commentary you've come to appreciate.
Tags
Food desert hunger Washington D.C. Welfare