If you’ve just started watching the New York Yankees in the postseason, you may have seen the players showing thumbs down after good plays, hits, and home runs. So why are the Yankees doing that? 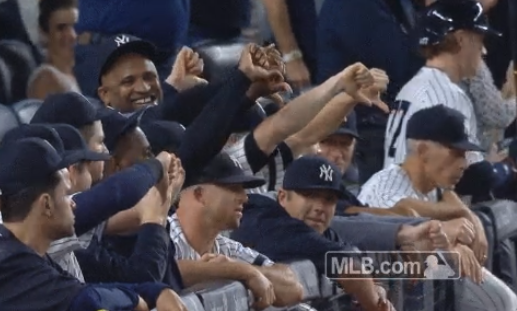 Where other teams use the spotlight, long-distance high-five or other obviously positive gestures to show appreciation for teammates’ awesome feats, the Yankees were given a new symbol of awesomeness from this guy during a mid-September game against the Tampa Bay Rays:

Whatever the Yankees did in the top of the 4th this guy was having NONE of it. Hall of Fame thumbs down pic.twitter.com/mrOfOwSkJX

The fan, Gary Dunaier, showed his disdain after Todd Frazier hit a 3-run homer and the Yankees’ YES network caught him in the act. Ever since then, the pin-stripped boys from Gotham have used it as there own.

To thank Dunaier, now referred to as “thumbs down guy,” Todd Frazier said the team should do something special for him.

“We might have to bring him in the clubhouse here and just walk around and just look at everybody with his thumbs down, say a prayer and then the next thing you know, the next guy will take off,” Frazier said. “You never know. It’ll be something funny.”

Gary is a Mets fan and was in the second row for the Rays/Yankees affair. According to him, there was a “sea of Yankees fans” surrounding him and instead of getting his “boo” drowned out, he chose something that would stick out – his thumb.

Dunaier said he had a bad experience the last time he attended a game at Yankee Stadium. Fraizer said he wouldn’t mind having the opportunity to make up for it.

“Yeah, why not,” Frazier said. “He’s a Mets fan and whatever but I read the article. It said he had a bad experience here or whatever it was. Maybe we can make that experience better for him.”

Dunaier said he’s having fun with the whole thing and was just glad the camera didn’t catch him “doing something stupid,” like sleeping in the middle of the game.