The test was held at the John C. Stennis Space Center in Mississippi at the A-1 test stand.

What is the RS-25 Rocket Engine

RS-25 liquid-fueled rocket engines feature 4 turbopumps that push massive amounts of liquid hydrogen and liquid oxygen into the combustion chamber. These engines were used in shuttle missions and will be used on future NASA’s Space Launch System missions. The SLS has four RS-25 engines producing 512,000 lbs of thrust each and two solid rocket boosters (SRB) that produce 3.4 million pounds of thrust each while the space shuttle only used three RS-25s alongside two SRB’s.

What is the SLS (Space Launch System)

SLS is NASA’s next-generation launch vehicle utilizing the most powerful rocket currently available to put the Orion spacecraft into deep space. The SLS has a very different primary mission from the Space Shuttle missions that came before it. The Space Shuttle (STS) was designed for re-usability in orbital flight missions. While SLS can and will perform Earth orbit flights, it was designed for space exploration – chiefly, a manned mission to Mars. It’s also 100% throw-away.

NASA illustrates a 1 million pound increase in thrust over the shuttle missions. Simply adding a fourth RS-25 would only add about 500,000 pounds of thrust indicating that the solid-fueled rocket boosters will be supplying the bulk of the increase in power. The SRBs used in shuttle missions produced max thrust of 3.1 million pounds while the new boosters are estimated to produce 3.4 million lbf. It is unclear whether the SRB’s will be reused or if pushing them harder and discarding them is how they’re producing the additional thrust. 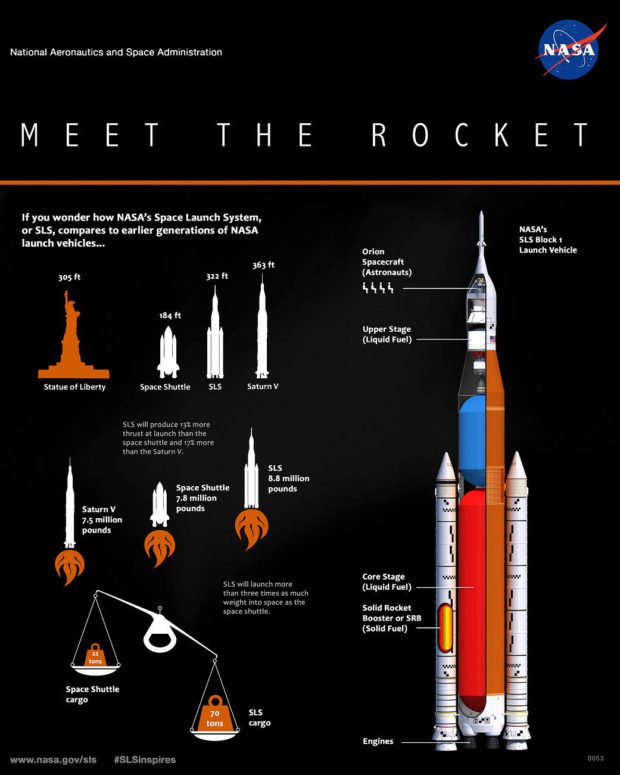 What is the Orion Spacecraft

NASA released this video on the Orion Multi-Purpose Crew Vehicle (MPCV) spacecraft that runs through features and functions.

NASA’s newest spacecraft, Orion, will be launching into space for the first time in December 2014, on a flight that will take it farther than any spacecraft built to carry humans has gone in more than 40 years and through temperatures twice as hot as molten lava and the massive radiation of the Van Allen belt to put its critical systems to the test.

Support Conservative Daily News with a small donation via Paypal or credit card that will go towards supporting the news and commentary you've come to appreciate.
Tags
Mars NASA Orion SLS SR-25