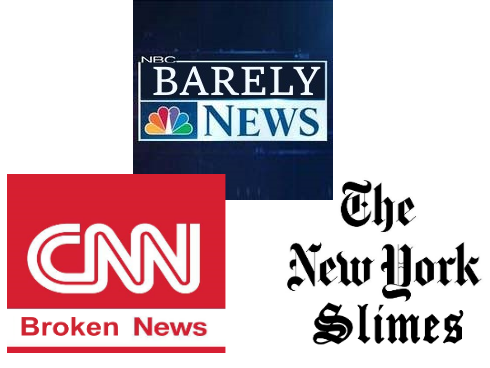 Now that it is being revealed that it Hillary and Obama are the real colluders with Russia not Trump, the liberal mainstream media is going all out to protect Hillary just like Trump said they would when he chastised them in the oval office last week.

They say things like “there is nothing there”,  “just a lot of smoke”, “they can’t prove anything” and the biggest one of all is “Only FOX News is reporting it.” Maybe that’s because FOX is telling the truth and not trying to protect the real criminals: Hillary, Obama and the DNC.

From 7am ET October 17 through 7am ET October 24, CNN’s reporters and anchors only mentioned the scandal twice: first, on October 19, after President Trump scolded reporters for failing to cover the story, anchor Wolf Blitzer offered a 19-second explanation of what Trump was talking about.

Recently Kelly Ann Conway was appearing on CNN with Alisyn Camerota. What transpired is a great example of their obvious bias against Trump and naivete about Russia having uranium.

While speaking to host Alisyn Camerota, Conway brought up former Democratic presidential nominee Hillary Clinton’s connection to Russia and the Uranium One scandal.

“What is it that worries the president about the Uranium deal?” Camerota asked. “Why now the fixation on the Uranium One deal.” (DUHHHH Alisyn. Don’t you know that uranium is the prime source of making nuclear weapons? Don’t you know that Putin is friends with Iran and reports say he sold uranium to Iran a few months ago?. Don’t you know that Putin is also friends with Kim in North Korea and could sell him uranium too? Don’t you realize that Putin has 1100 missiles aimed at us right now? Are you that naive or are you so blinded by your hatred for Trump and blind support for Hillary that you don’t see the danger that deal poses for us? If so then you shouldn’t be a news reporter.)

“The president is not worried about Uranium One. The people who should be worried are the people who benefited from it,” Conway responded.

“His spouse didn’t make a half-million-dollar speech in Russia while he was secretary of state,” she added. “He wasn’t president at the time when Russian folks were trying to infiltrate the State Department and get an advantage for this particular deal.”

Camerota asked why Trump was so curious about the deal. (I still can’t believe she asked that after Conway’s answer)

“Shouldn’t you? Shouldn’t we all? CNN is so vested in Russia, Russia, Russia. Don’t you want to hear from everybody now? Or are we just going to drop the word ‘Russia’ now because it gets just a little too close,” said Conway. (Way to go Kelly Ann)

Camerota tried to deflect back to Trump, alleging the president was somehow uncomfortable about the events that transpired. (Well DUHHHH)

“I’m just trying to get to that bottom of what it is that bothers you about it,” Camerota said.

“What bothers me about it is that we can’t get all of you who have been obsessed about Russia, Russia, Russia to cover it now that the shoe is on the other foot,” Conway shot back.

She added that it wasn’t difficult for Americans to connect the dots and realize the Uranium One deal represents everything that is wrong with “the swamp.”

Like the old saying goes, “there are none so blind as those that will not see.” So it is with the biased destroy rump mainstream media.

The Hill reported last week that while Clinton was secretary of state, the Obama administration approved a deal that gave a Russian uranium company control over 20 percent of America’s uranium supply, despite the fact that the FBI had evidence that “Russian nuclear industry officials were engaged in bribery, kickbacks, extortion and money laundering designed to grow Vladimir Putin’s atomic energy business inside the United States.”

During that time, high-ranking Russian officials involved in the deal donated millions of dollars to the Clinton Foundation.

Now that new information has been revealed, President Donald Trump has brought the issue back into the spotlight.

Former White House deputy assistant Sebastian Gorka echoed Conway’s statements, telling Fox News host Sean Hannity on Thursday that if the Uranium One Deal “had happened in the 1950s, there would be people up on treason charges right now.”

Gorka is so right just like I said in my previous article about the Rosenbergs which Gorka also mentioned that were executed for selling atomic secrets to the old Soviet union in the 50’s.

NBC’s Today Show took viewers inside North Korea on Friday morning for a segment with reporter Keir Simmons. Anyone watching the program was treated less to an objective “insider’s view” of the rogue regime than a strangely traitorous piece of propaganda that was dripping with sympathy for Kim Jong Un’s dictatorship.

Simmons then asked a North Korean soldier what he thought of President Trump.

“Trump is mentally ill,” said the officer. “If there is a war with America, we will win.”

Giving American viewers a look at what life is like behind the Communist curtain is one thing, but NBC should be more responsible when presenting outright North Korean propaganda on their airwaves. There is no moral equivalency between the U.S. and North Korea, Trump and Kim Jong Un. This is an evil dictator belonging to a family that has virtually enslaved his people for decades. In the meantime, the regime has turned into a worldwide menace, developing weapons of mass destruction and threatening to use them against every one of its enemies.

And NBC thinks it’s important to let us know that their military officers think Trump is “mentally ill?”

Why did this reporter not ask to go into a NK grocery store. Check and see what medical care is like. Actual news reporting is beyond the left wing zealot media. This was obviously an NBC hit piece on Trump and they do not bother to hide it .

But to NBC and the rest of the liberal media, as long as Trump is in the White House, the U.S. are the bad guys. This only makes the case that the media tells fake news to everyone.

Meanwhile Trump keeps plugging along making America great again living up to all his promises with having the stock market at an all time high 48 straight days in a row, unemployment at its’ lowest in years, economic growth at 3%, companies moving back here after lifting 800 of Obama’s regulations, getting the wall ready and creating a million and a half new jobs already and all the mainstream media cares about is Russia, Russia, Russia and anything that is anti-Trump.