Hurricane Nate is now a category one storm with 90 mph winds and its projected track is centered just east of Biloxi, Mississippi for an early Sunday morning landfall. 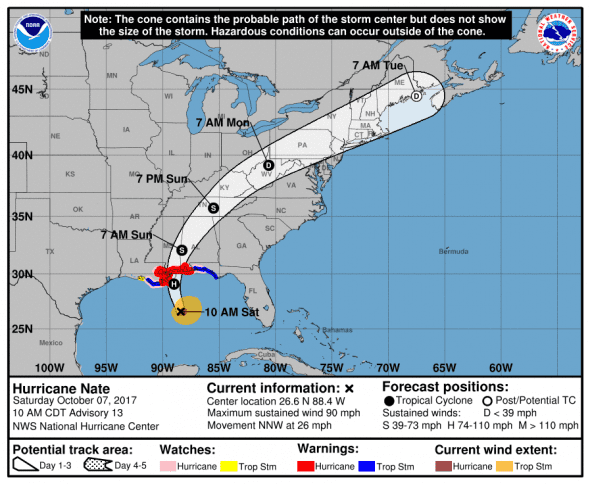 Nate is forecast to make landfall around 1 AM CDT as a high category two storm with maximum sustained winds of 105 MPH.

Extremely dangerous winds will cause extensive damage: Well-constructed frame homes could sustain major roof and siding damage. Many shallowly rooted trees will be snapped or uprooted and block numerous roads. Near-total power loss is expected with outages that could last from several days to weeks.

The storm is currently positioned at 26.6N, 88.4W with maximum sustained winds of 90 MPH. The storm is moving quickly, 26 MPH, to the north-northwest and has hurricane-force winds that extend outward up to 35 miles from the center and tropical-storm-force winds extend outward up to 125 miles. Nate is expected to produce storm surges of 4-6 feet from Morgan City, LA to the mouth of the Mississippi River, 7-11 feet from the Mississippi River to the Alabama/Florida border and 4-6 feet from the Alabama/Florida line to the Okaloosa/Walton County line.

Because Nate is moving so quickly, affected areas are expected to only see between 2 and 6 inches of rain with some isolated spots possibly receiving 10 inches.

A Tropical Storm Warning is in effect for…
* Lake Maurepas
* West of Grand Isle to Morgan City Louisiana
* East of the Alabama/Florida border to the Okaloosa/Walton County
Line.

Support Conservative Daily News with a small donation via Paypal or credit card that will go towards supporting the news and commentary you've come to appreciate.
Tags
Hurricanes Nate The Weather