There’s another weather disaster looming in the shadows of America. Is this yet another attempt by God to bring America to her knees in repentance?

In previous writings, we’ve discussed that Solar Eclipses are a warning of things that are to come. At the time of this writing, it’s been 11 days since The Great American Eclipse. Since that time, the state of Texas has already been devastated by Hurricane Harvey, which in all estimation, is on track to be the most devastating Hurricane in American history, even surpassing Hurricane Katrina.

The Warnings are increasing in frequency, as well as in intensity. God is allowing these things to happen so that this country, which has strayed so far away from Him, will fall to her knees in repentance. This is NOT God’s judgment on America! Previously, in discussing Solar Eclipses being a warning of things to come, it was not stated quite clearly enough that the things we are experiencing at the current time are NOT judgments. The cataclysmic events that are happening currently are WARNINGS of the COMING JUDGMENT that is barreling down on not only America, but the entire world!

Cleanup has barely begun from Hurricane Harvey‘s devastation, and now America’s eyes are focused on yet another powerful hurricane spinning off the southern coast in the Atlantic Ocean, and she is rapidly intensifying. Hurricane Irma could be the next weather disaster to hit American soil. Hurricane Irma is in is expected to continue strengthening this weekend, and she has the potential of becoming a powerful Category 5 storm that could quite possibly make landfall next week.

Interestingly enough, as we continue to look at the possible deeper meanings of the warnings we are being given, let’s look at what the name Irma means. Remember, in Genesis 17, God changed Abram’s name to Abraham. And another example of the numerous examples we can find in Scripture, God instructed Hosea to name Gomer’s children specifically to send a message to the children of Israel. God is the same yesterday, today, and forever! God is trying to warn mankind to REPENT! His mercy will not last forever!

Is Hurricane Irma a Decree WARNING America, and the Whole World, that a Noble War is on the horizon confirming that the Lord’s mercy is running out, and His Revenge on the sinful, debauchery is coming soon?

Stay tuned… because there’s more Revelation to come this month! 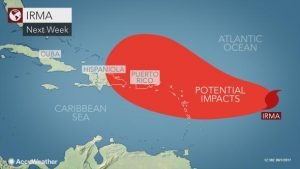