Senator John McCain sent a letter to the Trump administration asking DHS to waive the Jones Act as a way to curb the fuel crisis in Puerto Rico. Once again, he’s wrong.

Puerto Ricans are struggling to get fuel to run generators and automobiles and eight Senators had requested that DHS suspend the shipping rules. When the administration rejected their request, McCain stepped in and asked them to reconsider. 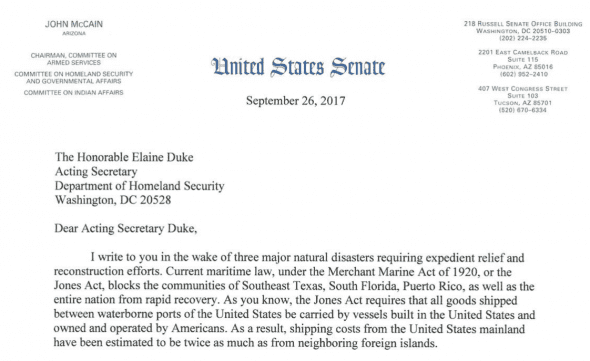 The Merchant Marine Act of 1920, also known as the Jones Act, requires that ships carrying goods between U.S. ports, including territories, be carried on ships built, flagged to, crewed by and owned by United States citizens or companies.

The law was suspended in Florida after evacuations and recovery efforts from hurricaneIrma put unprecedented demand on the fuel supply. Florida’s gasoline and diesel shortages came because demand outstripped available supply inside the state. Therefore, suspending the Jones Act so that vessels of any country could carry fuel to the stricken state made sense.

Puerto Rico’s fuel shortage is not an issue of supply to the island. According to FEMA and the territory’s governor, “there is plenty of fuel in the area.” Instead, according to FEMA, damaged port, road and other infrastructure is making it difficult, and in some areas impossible, to get the fuel to working gas stations. More ships bringing fuel to port won’t alleviate massive distribution issues.

Suspending the Jones Act would do nothing to alleviate availability or prices in hard-hit Puerto Rico. John McCain is wrong – again.

Support Conservative Daily News with a small donation via Paypal or credit card that will go towards supporting the news and commentary you've come to appreciate.
Tags
John McCain Maria Puerto Rico The Jones Act