In a year of truly ridiculous and mind-boggling regressions to where just about EVERYTHING no matter how innocent, is being interpreted by cultural cleansing zealots as racism, you would have thought that we hit rock bottom over the idiotic Hobby Lobby hullabaloo.

An overly sensitive neurotic snowflake came across a decoration in her Texas area location that had a couple of cotton stalks sticking out of a glass vase and decided to take action.

This nitwit – who goes by the name Daniell Rider – became a sensation on social media for promoting the idea that somehow cotton itself is racist.

Never mind that her own closet likely contained clothing items made out of cotton as well as her makeup cabinet (Q-Tips, cotton balls), it’s always the knee-jerk tendency to rage against the oppressive white supremacist society (translation: President Donald Trump) that drives these mouth-breathing freaks to fits of frenzy. 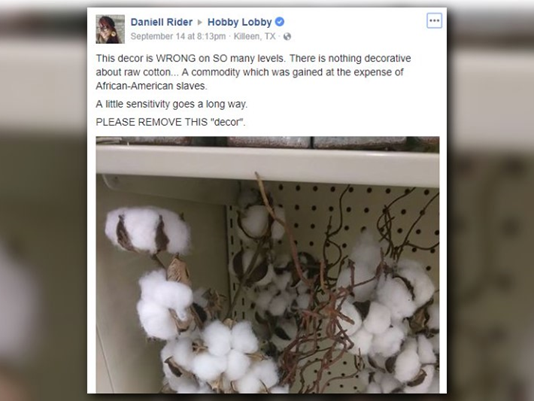 While Rider’s idiotic theory was quickly discounted by most people who are sane, the same can’t be said by an idiotic liberal college official in Tennessee.

Nashville based Lipscomb University’s doofus president Randy Lowry was compelled to issue a profuse apology to black people who were in his home – he bought one of Hobby Lobby’s offensive items AND used it as a centerpiece when he hosted a dinner for them with collard greens and cornbread on the menu.

Via The Tennessean “Lipscomb president to meet with black students in wake of cotton stalk controversy”:

Lipscomb University President Randy Lowry said he would meet with black students this week in the wake of a controversy over the decor and food at a dinner in his home.

Lowry said he would make “special efforts” to talk to students who were offended by cotton stalk centerpieces that were set out last week for the dinner he hosted for black students enrolled at Lipscomb.

“We’ll invest a lot of time this week talking with students and trying to understand at deeper levels,” he said. “Rather than running away from something, I’ll lean into those kinds of conversations and relationships.”

Some students took to social media to criticize the centerpieces, which they considered a callous symbol of slavery. Students also took issue with the menu, which featured collard greens and corn bread a day after Latino students had come to Lowry’s house for fajitas.

On social media, students described Lowry’s initial reaction to their concerns as flippant. They said he brushed aside their concerns and suggested cotton was not offensive.

Lowry issued a public apology to the students on Friday and doubled down Monday in an interview with USA TODAY NETWORK – Tennessee, saying he understood students’ concerns and would continue to seek forgiveness.

“You roll these things back and you wish you would have spent more time here and said these words more carefully,” he said during an interview from his office. “The bottom line is students were invited to my house for dinner. And I wanted to host them and celebrate their being at this university. I am extraordinarily sorry that anything got in the way of that.

“I can ensure you that none of that was intended.”

God help us all!

At this rate, the cultural jihadists will soon be ripping the cotton undies off of people and burning them in a huge ceremonial bonfire that will eerily resemble those of the Ku Klux Klan – it’s a freaking Bizarro universe anymore.

Liberalism is a serious mental disorder and thanks to the fanatics in our nation’s educational institutions, it’s spreading like a mutant form of alien kudzu.