Cleveland Cavaliers ball hog LeBron James has picked up a torch and joined up with the anti-Trump lynch mob after organized leftists brought violence to a rally in Charlottesville, VA that was held to protest Confederate monuments being torn down by the liberal Taliban.

Once again showing that sports and politics – especially when it comes to race – are becoming closely linked, the NBA superstar took to Twitter to taunt President Donald Trump and to insinuate that he is a racist who is aligned with white supremacists.

It's sad what's going on in Charlottesville. Is this the direction our country is heading? Make America Great Again huh?! He said that🤦🏾‍♂️

According to Sports Illustrated “LeBron James Speaks Out on Charlottesville, President Trump”:

LeBron James took to Twitter Saturday to voice his displeasure with the violence and white nationalist rallying taking place in Charlottesville, Va. this weekend, and appeared to take a pointed swipe at President Donald Trump as well.

James, who has been famously outspoken on social issues in the past, expressed his sadness at the weekend’s events and made a reference to Trump’s ‘Make America Great Again’ slogan, appearing to punctuate it with a sense of frustration. The white nationalists openly and verbally aligned themselves with Trump’s campaign rhetoric, with some Charlottesville marchers yelling “Heil Trump” while also parroting antiquated, racist sentiment.

James is chief among a number of NBA players and other athletes who have spoken up against the violent, racist rhetoric after scores of white nationalists with torches marched, chanted racial slurs and attacked counter-protestors in Charlottesville on Friday night.  The situation escalated and resulted in one person’s death and 19 injured after a car plowed over another group of counter-protestors.

I guess that I’m getting old because I still remember when Sports Illustrated was all about sports, now it is following ESPN down the rathole of extreme leftist politics.

It isn’t the first time that King James has expressed his politics either. In 2014 he showed his support for the Black Lives Matter movement by wearing an “I Can’t Breathe” shirt before games.

He also endorsed Hillary Clinton, joining her onstage at an event in Cleveland on the weekend before her fateful election. 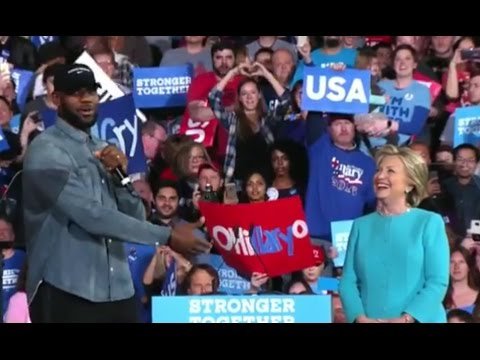 He is also probably still pissed after an alleged vandal painted the pejorative “N*GGER” on the gate at one of his expensive homes. The NAACP blamed that on Trump too.

You can take anything this clown says with a grain of salt because he has already gone on record showing his political and racial bias. It’s really tough to swallow the notion that this is a racist country after we just had a two-term black president.

Unfortunately, as a basketball icon, he serves as a role model to millions of young people who will come to view the President and whites in general with increasing suspicion after their idol implicitly condoned such things.

Support Conservative Daily News with a small donation via Paypal or credit card that will go towards supporting the news and commentary you've come to appreciate.
Tags
LeBron James NBA