The Facebook fascists are at it again and have reportedly issued a three-day ban to popular conservative cartoonist Ben Garrison over an epic portrayal of the treacherous, bloodthirsty and petty U.S. Senator John McCain.

McCain is being treated as some sort of bipartisan political god after he flew into Washington last week, taking a break from brain cancer treatment to stick it to President Trump by casting the deciding vote that would preserve Obamacare as the law of the land. He also was instrumental in the Russian sanction bill’s veto proof margin that Trump had no choice but to sign today.

Mr. Garrison has long been one of this humble author’s favorite cartoonists and his art is a modern day classic, just drop by GRRR Graphics and see for yourself.

But the censors at Mark Zuckerberg’s social media colossus have deemed Garrison’s latest to be unacceptable for some reason and from looking at it, it’s damned hard to see how this can be deemed hate speech.

McCain is a warmongering old bastard who long ago broke with whatever was good for America and the rivers of tears shed over his brain cancer should not obscure that this is an evil man with nefarious intent that is pushing the country towards a nuclear war with Russia.

Like all of his other cartoons, the McCain tumor removal masterpiece is a legitimate portrayal of what is protected political speech under the United States Constitution.

Check it out and you be the judge: 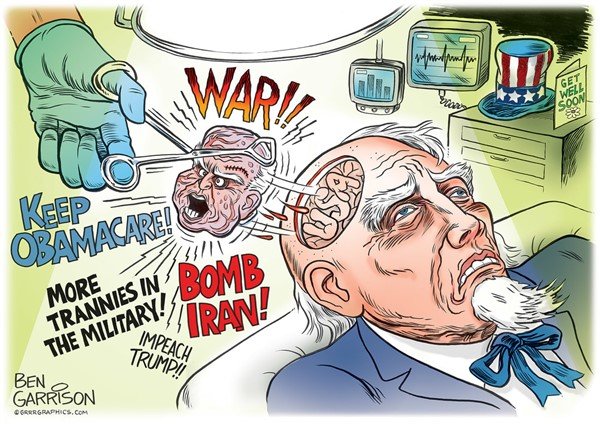 Yet Garrison tweeted out that he had been smacked with a three-day ban.

At least it isn’t permanent but I’m damned hard-pressed to see what the issue is with taking a poke at the deranged old warmonger who has kicked more than his share of people when they were down.

All of the artist’s work can be seen GRRR Graphics, be prepared to spend at least an hour and to laugh your ass off like never before at his brilliant skewering of all that is wrong in this country.