The decision of the Pentagon to delay the integration of transgenders into the armed forces has Democrats screaming bloody murder.

One of the prime objectives of former President Barack Obama and his pompous academic social engineer Secretary of Defense Ash Carter was to feminize the military and that idea was nowhere more evident than their mandate to begin the integration of transvestites into America’s armed forces.

But as with much of Obama’s legacy, this idea is also running into resistance now that there has been a change of management in the White House.

Defense Secretary James “Mad Dog” Mattis is putting the integration project on hold in order to assess the impact on troop readiness and lethality.

While the former U.S. Marine went to great lengths to emphasize that this was simply a delay, the Democrats went bananas as they tend to do whenever one of their precious identity politics demographic groups has its feelings hurt.

This time it is House Minority Whip Steny Hoyer – a career politician who is pushing 80 years old and is yet another great example of why America needs a constitutional amendment on term limits – who is blowing his horn.

House Minority Whip Steny Hoyer (D-Md.) condemned the Trump administration on Saturday for issuing a delay in allowing transgender soldiers to serve in the military.

Hoyer, the No. 2 House Democrat, called the Pentagon’s move “outrageous” and argued it was done “without providing any evidence.”

“It is outrageous that the Trump Administration would issue a delay in allowing transgender Americans to serve openly in our military without providing any evidence to support such a decision,” Hoyer said in a statement.

“We need to ensure that all those who are talented, driven, and capable and who wish to serve in defense of our country – often in mission-critical positions – are able to do so,” he said. “If the Pentagon cannot adequately explain or justify this reversal in the policy implementation, it ought not to pursue it.”

Hoyer mentioned his role in reversing “Don’t Ask, Don’t Tell” as one of the proudest moments of his congressional career. The practice, which was put in place in 1993, barred openly gay, lesbian or bisexual people from military service. The policy was repealed in 2011.

“When I was Majority Leader, one of my proudest moments was bringing to the Floor legislation to end the discriminatory ‘Don’t Ask, Don’t Tell’ policy and enable gay and lesbian Americans to serve openly,” Hoyer said.

But Hoyer is running a devious con game in conflating transgenders with those who are simply gay. It’s apples versus oranges and dog whistle language to agitate the base in advance of an election.

Unlike gays and lesbians – who have long served with honor albeit closeted – transgender folks are often confused individuals who comprise a minuscule percentage of the overall population.

Yet somehow, they have become of such importance to Democrats that the nation has been embroiled in ridiculous and costly cultural warfare over whether throwing open women’s restrooms to transgenders (along with perverts and sex offenders) which has become another club that they can use to bludgeon their political foes as bigots with.

Don’t believe it! The Democrats are exploiting these people for their votes and Secretary Mattis is correct that a study on the impact of transgenders on the military is necessary.

Now that Ashton Carter has taken his ideological ass back to Harvard, the Pentagon is back under the control of a man who truly understands the culture of the military.

Support Conservative Daily News with a small donation via Paypal or credit card that will go towards supporting the news and commentary you've come to appreciate.
Tags
Barack Obama Democrats LGBT Military Politics 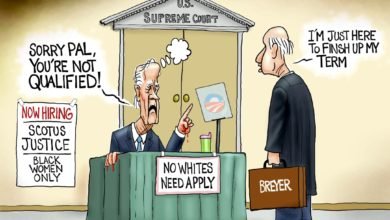