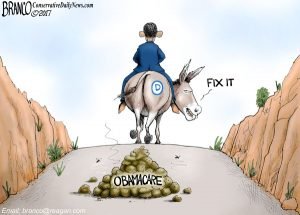 In an epic establishment GOP failure, repeal of Obamacare is gone. For the next 14 months, Republicans will promote the repair of Obama’s failing health care law exactly as Democrats have demanded for months and failed to do for years.

Families struggling under the weight of massive premium increases and astronomical deductibles will get no relief, but politicians will improve their images with constituents and relationships with lobbyists.

Health care is pure politics. Republicans just don’t wish to be tied to a sinking ship, damn the consequences. And, Democrats can’t let their buddies in big pharma, hospital lobbies, malpractice litigation and physician groups down. Health care professionals and organizations need the subsidies and subsidized patients to keep from losing money.

Making money, in itself, is not a bad thing. Doctors have enormous responsibilities and go through training that most couldn’t fathom and would probably fail. The problem is that providing health care has gotten so expensive that only subsidization can defray the costs.

The Subsidies – Your Money Funneled to Providers

Why are health care costs so high

Health care costs aren’t rising because low-income people don’t have insurance. They aren’t rising due to greed in the health care profession or industry – in most cases. Medical care is getting more expensive because regulation has been focusing on the wrong industries.

Out of control malpractice litigation

Doctors and hospitals are forced to practice what is known as “defensive medicine” due to constant and often frivolous lawsuits. Malpractice insurance costs are extraordinary and increasing in order to protect the medical field and there is no risk for the plaintiff even if they lose. The lawyers eat the costs in the case of a loss and their exorbitant fees allow them to run a high-risk model of suing everything that moves and see which ones work out.

Price controls on American-made drugs in other countries

Americans are forced to subsidize the cost of drug research as other countries as close as Canada have strong price controls on pharmaceuticals. Drug companies are in business to make money and if the UK and Canada can limit the costs to their nationalized health care systems by having Americans pay more for those drugs – why shouldn’t they?

Putting the same firm price controls in the U.S. would likely lead drug companies to slow their development of innovative medicines. A company that doesn’t make money, goes out of business. If the profits aren’t there, they won’t do it anymore. That’s how it works.

Doctors have complained that the electronic medical records requirements coming from Congress have forced them to spend much more time and manpower dealing with the regulation than providing medical care. Their only choice is to hire more people to help service the same population of patients. That means fewer dollars per visit and lost money to the practice, hospital, and doctor.

Due to politics and massive lobbying efforts, the Obamacare repair will not fix the health care costs, but it will keep Obamacare alive through the 2018 mid term elections. Something Democrats must have in order to avoid a massive revolt.

Health care reform will return to committees in the Senate for sure and probably the House as well. Members of Congress will then debate the measures needed to keep Obamacare from continuing its death spiral of unavailable and unaffordable insurance in a large number of counties in many states.

There will be no talk of tort reform, pricing equality or reduction of regulation – no, the Democrats will never go for that so those measures are off the table. Republicans have proven an inability to fight for anything they believe in – or even to fake it very well.

No, the repair will likely increase funding for the Medicaid expansion, give states more power to decide how to spend the federal dollars, keep the reinsurance subsidies, and keep the individual and employer mandates in place. Obamacare cannot survive without the mandates and insurers will not let Democrats give up on the expansion and subsidies. They can’t afford to.

Republicans can’t politically afford to let Obamacare “implode” so they will just ignore the president in what might be a kamikazee run at 2018.

First, tort reform. Plaintiffs should be required to pay the defendants costs should they be unable to prove malpractice. Perhaps some more reasonable and technical definition of a frivolous lawsuit with the penalty of losing money would prevent ambulance chasers from ripping off good medical professionals and facilities. The result would be fewer unnecessary tests just to prevent a lawsuit and reduced malpractice insurance costs.

Third, Congress needs to make it illegal to sell a drug overseas for less than a certain percentage of the American in-pharmacy/in-hospital cost. The free-market only works when it is free and global pharma has turned American pharmaceutical consumers into the wallet of the world. It’s time to tell drug manufacturers that you can’t sell at a loss elsewhere just to charge more to our elderly and infirmed more.

What will actually happen

Republicans will cower in fear of the upcoming mid term elections. Having failed to do anything on their own, they will debate in committee knowing that if nothing comes out, they will be equally to blame. John McCain didn’t see it, but Senate Minority Leader Chuck Schumer certainly did when he complimented McCain for killing any hopes of GOP repeal in favor of letting Democrats take the wheel.

What will Americans get? Not much. Premiums will not go down, availability will not rise – that is not the intention. The goal is single-payer and more Americans every day are thinking that government-run health care is looking better even if only due to the mess that Obamacare created.

The sheep believe they are running the farm. The wolves are just waiting – and dinner is soon.