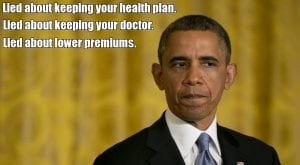 The attempts to repeal Obamacare, or the Affordable Care Act (ACA), may seem primarily political, but they’re not. President Obama’s signature legislative accomplishment is an unmitigated disaster and a dismal failure.

The most evident failure is escalating health insurance premiums. President Obama incessantly claimed, “The average family will see their costs reduce by $2,500.” Unsurprisingly, actual costs have escalated dramatically, with skyrocketing premiums costing much more than before.

The Kaiser Foundation indicates that the average premium increase since 2013 has been 99% for individuals, and 140% for families. Even employer sponsored plans have seen premiums increase by 32%.

Deductibles continue to rise especially for exchange-based policies. According to HealthPocket, the average deductible for a bronze plan this year is $6,092 for an individual and $12,383 for a family. For a silver plan, those figures are $3,572 and $7,474 respectively.

Two major components of Obamacare have had a dramatic impact on the premium cost and increasing deductibles. One is the mandates on coverage that the ACA requires of all approved plans, and the other is the loss of competition in the health insurance marketplace. 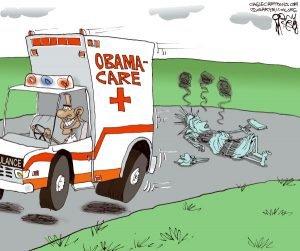 At implementation, exchange approved plans and sponsors were restricted, but since implementation, competition has declined even further, with fewer and fewer health insurance companies participating in the exchange. According to the Heritage Foundation, over 70% of U.S. counties “have only one or two insurers offering coverage on the exchange in 2017.”

And that diminishing pool of providers includes those 23 new “nonprofit health insurers” created by Obamacare’s funding. These providers were created in 2014 utilizing just over $2.4 billion in taxpayer-funded subsidies, considered to be “loans,” which will never be paid back. They have been dropping like flies since inception. So far, 18 out of the initial 23 nonprofit insurers have gone under, resulting in lost competition in the marketplace, more consolidation and concentration of plans, and a combined loss of $1.9 billion.

Another failure of Obamacare is the actual enrollment of the government-sponsored plans through the federal and state exchanges. Original projections from the Obama administration and the Congressional Budget Office (CBO) estimated that 21 million Americans would procure their coverage through the exchanges. However, the average monthly effectuated enrollment was just half that figure, at 10.4 million in 2016.

Many people have opted to bypass the exchanges, and the purchase of healthcare insurance altogether. According to the Internal Revenue Service, over 12.7 million taxpayers claimed one or more exemptions from the Act’s mandate to purchase coverage, and another 6.5 million opted to pay the penalty for having no coverage, rather than sign up. 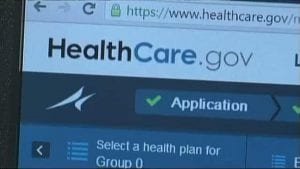 Which brings us to the operation and cost of the exchange websites themselves. The federal government appropriated nearly $5 billion for states to set up their own exchanges. Most states either chose to not set up their own, or attempted and failed, even with the tempting pecuniary windfall. In 2017, there are only 11 states running their own exchange. The other 39 rely on the federal HealthCare.gov which cost a whopping $800 million to build.

In spite of the inexorable promises of President Obama that “If you like your plan you can keep it,” many people did in fact lose their insurance plans. The Act’s rules and mandates went into full effect in 2014, and nearly 5 million plans were cancelled by providers as they didn’t comply with the new mandates.

The future of the Medicaid program was financially tenuous before passage and implementation of the Act. But it was made even more tenuous afterward. Because instead of reforming Medicaid, which is often characterized as “over-stretched” and “unsustainable,” Obamacare dumped millions more people into it. After just the first two years of the Act, nearly 12 million more people have been added to Medicaid. This expansion is estimated to add another $969 billion in spending over the next 10 years, making the total federal funding of Medicaid a whopping $3.8 trillion from 2017-2028. 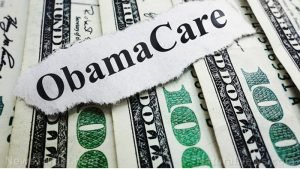 In January, 2015, the CBO issued a report that revised its earlier estimate for the impact of Obamacare. They forecasted that the federal government would spend $1.993 trillion over a decade, concluding in 2025, and would generate $643 billion new taxes, penalties, and fees. The remaining net cost of $1.35 trillion would result in “between 24 and 27 million” fewer citizens being uninsured. When you run the math, that amounts to a staggering $50,000 price tag per person. And even with the incentives and subsidies, at the end of the decade there would still be “between 29 million and 31 million” nonelderly citizens without health insurance.

Obamacare has some beneficial features, but they come far short of compensating for the damage the Act has done to our health care delivery. It has reduced competition, significantly increased premium costs, and for the first time in the nation’s history, placed mandates on taxpayers to not only buy a product, but a certain kind of product, not of the public’s choosing. It seems Nancy Pelosi was right, they had to “pass the bill to know what was in the bill,” and we’re seeing the fruits of what was in the bill, and they just get worse and worse. 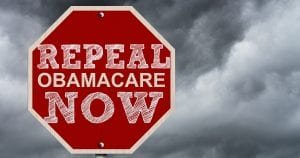 Members of the majority party in the House of Representatives have kept their word and passed a repeal of the ACA. And currently four members of the majority party in the Senate are holding the Senate’s version in limbo, in spite of their previous claims to support repeal. Senators Susan Collins, (R-ME), Mike Lee (R-UT), Jerry Moran (R-KS), and Rand Paul (R-KY), have indicated they will not support the current bill before the senate. And of course, the minority party will not lift a finger to help, in an apparent conviction that the ACA will not implode (predictable detachment from reality) and to preserve Obama’s signature legislative “accomplishment.”

Voltaire once wrote, “Perfect is the enemy of the good.” And this is nowhere more accurate than with regard to governance. There likely has never been a “perfect” bill written, so to obstruct the promise to rescind the ACA for lack of a perfect bill is sheer lunacy. Governance is incremental, and to prevent a swing of the pendulum moving back in favor of the American public with regard to healthcare represents an abdication of the elected officials’ role to act in the best interests of the nation, and constitutes a broken promise.

Support Conservative Daily News with a small donation via Paypal or credit card that will go towards supporting the news and commentary you've come to appreciate.
Tags
healthcare Obamacare Obamacare repeal The Affordable Care Act