Former House Speaker Newt Gingrich is worried about the failure of Republican governing reality not match Republican campaign rhetoric. Newt told Fox News, “I would say the highest focus ought to be on getting the tax bill through because if we don’t have economic growth next year, I think we’re in real danger of having Speaker Nancy Pelosi.”

Big time Texas donor Doug Deason has already told Curator of the Senate Mitch McConnell that his wallet is a dry hole until McConnell and Speaker Paul Ryan “produce results on health care and tax reform.” And Deason isn’t the only donor heading for the customer service window hoping someone is there to ask for a refund. 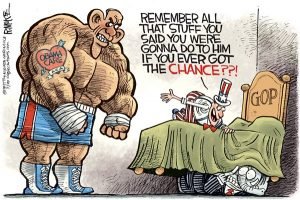 Sean Lansing, of the Koch brother’s Americans for Prosperity, told Lifezette there should be “consequences” for repeated failure.

Now that “legislative mastermind” McConnell has failed to “repeal and replace Obamacare” followed by failure to just repeal, it looks like Deason is going to have a long–term increase in his disposable income.

Members of the base like you and I can’t pressure the likes of McConnell and Ryan individually with our wallets, but we can pressure them with our votes in aggregate.

That’s why I propose conservative voters to join together and help make Newt’s fears come true: Let’s “Lose the House to Win the Future.”

The corporate Republicans running the House and Senate view the conservative base, which loyally keeps them in office, in much the same way arrogant Victorian explorers viewed the natives in Africa: Dangerous savages who are useful for toting ballot boxes on their heads but need to be house–broken before allowed into polite society.

That’s why the bubble–dwelling GOP establishment must be sent a message that will break through the impervious barrier of complacency and arrogance that surrounds their Capitol Hill offices. And Nancy Pelosi is just the person to deliver it.

This requires conservatives to change their voting behavior in November 2018. In the past conservatives held their nose and voted for RINO Republicans, because the thought of the Democrat alternative in office was too terrible to contemplate.

As a result, the base was rewarded with accommodationist weaklings who preside over the Vichy government that currently rules us.

Now it’s time to embrace the alternative. Conservatives must refuse to vote for all Republican House incumbents — unless your representative is a member of the House Freedom Caucus. This doesn’t mean you vote for the Democrat.

Instead, conservatives should vote for a write–in candidate. Resist the temptation to write in Mickey Mouse. Cartoon character votes, although relevant to the current GOP leadership, will only serve to have your write–in dismissed as a frivolous vote.

Instead, I suggest all participants in my “Lose the House to Win the Future” campaign write in Rep. Mark Meadows, the chairman of the genuinely conservative Freedom Caucus. Thousands of write–in votes for Meadows, spread across the country will be an obvious protest vote by conservatives that cannot be ignored by the Rep. Barney Fife’s cowering in DC.

There’s nothing like listening to Speaker Pelosi diesel on about evil Republicans to demonstrate to McConnell and Ryan that serial conservative betrayals come with a cost. Ideally, the two founding members of the Can’t Do Caucus will be ruminating on their failures from the back benches of the respective houses after they’ve been ousted from their pitiful leadership charade.

Meadows and the rest of the Freedom Caucus will be the framework around which a new conservative House leadership can be built — ready to resume power when conservatives vote for House Republicans in 2020.

Let me stress House votes are to be the only change for conservatives. Votes for Senate GOP candidates will remain unchanged, even if your only choice is a nose–holder like media parasite Lindsey Graham (R–MSNBC). It simply takes too long to regain control of the Senate. Besides, just the shock of the House loss may inspire Graham and his ilk to find those conservative campaign promises that have evidently slipped down between the sofa cushions.

Sure Democrat wild–eyed pistol takers in the House will pass gun confiscation bills, grant illegal aliens citizenship and demand Baptists dance at same–sex weddings, but it won’t matter. The same McConnell–sclerosis that clogs the Senate will stop those bills, too.

My “Lose the House to Win the Future” is like the old joke about the farmer and the mule. Before every turn, the farmer would jump down from the wagon seat and hit the mule with a 2X4. A passerby saw this and asked why hit the mule since the wagon made all the turns?

The farmer replied, yes that’s true, but first you have to get the mule’s attention.

Losing the House in 2018 will be the biggest attention–getter possible.