Branding the U.S. president an “authoritarian populist”, Saman Zia-Zarifi, secretary-general of the Geneva-based International Commission of Jurists (ICJ), compared him to the leaders of Turkey, the Philippines, Hungary and Venezuela.

Zarifi cited as an example Trump’s travel ban on nationals from six Muslim-majority countries, a policy that he called “highly problematic” under the U.S. constitution and international law.

His profile at Relationship Science is sparse – almost as though he appeared from nowhere.

That’s it – nothing more. His entire career has been with the IJC.

He passed the state bar of California in 1993 but listed a French address: 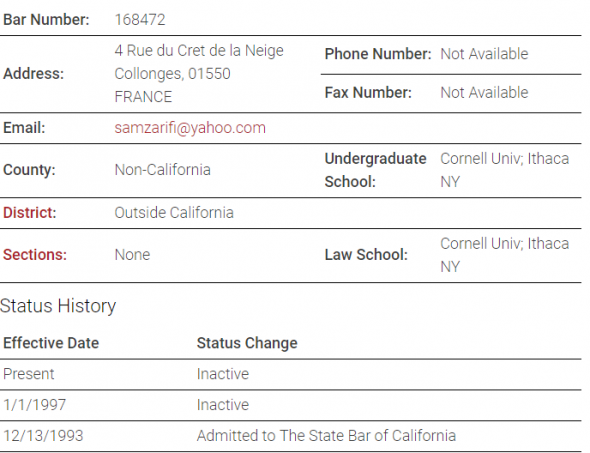 In 2011 Saman Zia-Zarifi was listed as a Director for Amnesty International – another globalist organization using human rights as a means to promote open borders and destroy sovereignty.

Who is the International Commission of Jurists (ICJ)

The ICJ is a rather obscure organization with little to show for its 60 years of existence. The group uses political correctness and an ineffective website to push the new world order future vision of open borders, serfdom to the United Nations and to make sovereignty a nasty word.

Their “history” page is a self-glorifying wall of do-nothingness:

The ICJ was established following the 1952 ‘International Congress of Jurists’ in West Berlin. The Congress was organized by the ‘Investigating Committee of Free Jurists (ICJF)’, a group of German jurists committed to investigating human rights abuses carried out in the Soviet Zone of post-war Germany.

During the Congress, delegates decided to make provisions to expand the work of the ICJF. A five-member ‘Standing Committee of the Congress’ was appointed to carry out further investigations into human rights violations in other regions of the world. In 1953, the Standing Committee created the “International Commission of Jurists (ICJ)” that we know today.

ICJ’s “news” wall displays posts where they moan about human rights offenders which they equate to European immigration control.

The ICJ and the International Detention Coalition (IDC) have presented their observations on the draft European rules for the administrative detention of migrants.

In their submissions, the two human rights organizations noted that the current detention practices in most Council of Europe member States raise serious questions as to their compatibility with human rights law.

Like Amnesty International, IJC appears to be a non-sanctioned arm of the United Nations. Same goal – destroy the sovereignty of nations, but without all the scrutiny that the U.N. would receive.

Support Conservative Daily News with a small donation via Paypal or credit card that will go towards supporting the news and commentary you've come to appreciate.
Tags
Amnesty International Saman Zia-Zarifi The International Commission of Jurists