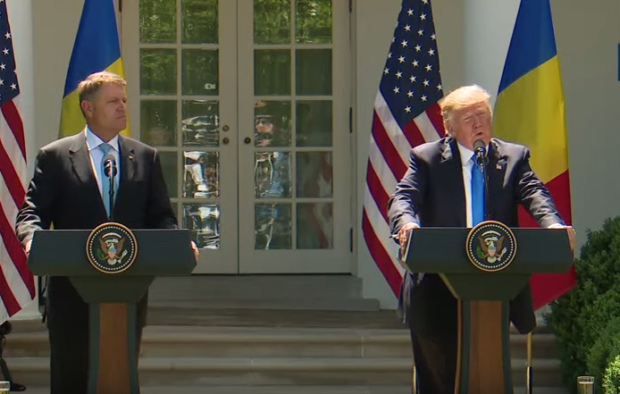 President Donald Trump said Friday that fired FBI Director James Comey‘s testimony was false and that news on the tapes could come out “soon.”

During a joint press conference with Romania’s President, President Trump told reporters, “I didn’t say that,” when asked if he told Comey to “let this go” in reference to Micheal Flynn. When asked if Trump asked for a loyalty pledge from Comey, Trump more emphatically denied Comey’s allegations.

“I hardly know the man. I’m not going to say I want you to pledge allegiance. Who would do that?” Trump exclaimed.

Pressing further, the President was asked if he would say the same thing under oath to which he answered, “100%.”

He was also asked when he would release tapes of those conversations if they exist.

“I’ll tell you about it over a very short period of time. You’ll be very disappointed with the answer.”

It is unclear which would be more disappointing to members of the press. If there are tapes and they make Comey out to be conniving and dishonest – that would likely disappoint the liberal media. If the tapes don’t exist, that would be equally disappointing. The only reason the media wants the tapes is that they believe that they will corroborate Comey’s version of events and impune the President.

Unless the alleged tapes appear, the President’s comments today have officially turned this into Trump’s word against Comey. And James Comey just admitted under oath to leaking government documents. Credibility lost can never be regained.

Support Conservative Daily News with a small donation via Paypal or credit card that will go towards supporting the news and commentary you've come to appreciate.
Tags
James Comey Politics