It seems that after all these years Martin Luther King, Jr. was wrong when he fought for so long to end segregation. I guess all the marches, the beatings, the jail terms, the fighting to change laws were for nothing because it seems now there are blacks who want to go back to the good old days of segregation. Not only are they for it, but are protesting to bring it back, just as MLK protested to get rid of it.

I guess that old saying is true that if you wait long enough, everything will come back in style. There is an activist group at the University of Michigan that is proposing that they are segregated from whites, in the form of safe-spaces for blacks. There is a student group who call themselves Students4Justice that is demanding campus officials provide them with “a permanent designated space on central campus for Black students and students of color to organize and do social justice work.”

I don’t get it, what kind of justice are they looking for? MLK thought that justice was getting rid of segregation; I guess these blacks feel bringing back segregation is justice. The group has said, “We are calling on someone to care about students’ concerns and to lead us with integrity and help us fight against the oppression and hateful acts that try to destroy us and our community.” Oppression and hateful acts, what the hell are these kids talking about? In today’s society, these Liberal-Progressives see racism in everything that does not agree with what they believe. Imagined oppression is a dangerous thing.

The craziness of all this is that these are the same people that are so-called advocates for the ideals of diversity, equity, and inclusion, yet they scream for segregation. If you can understand that, please explain it to me, because I think its nuts.

But it’s not only at the University of Michigan; colleges around the country are jumping into this anti-MLK feeling. Harvard is also jumping into the act. For the first time in the institution’s history, there will be a separate graduation ceremony for black students, and this is a University that was started in 1636.

One of the black organizers at Harvard has said, “This is not about segregation. It’s about fellowship and building a community.” OK, so if white students want to exclude blacks because of fellowship that would be OK? Are you kidding me, they would be called racists and bigots, for wanting to form a fellowship for white guys.

You know what, I am so sick of all this Liberal-Progressive crap if blacks want to bring back segregation I’m all for it. While we are at it let’s bring back racial steering to keep neighborhoods segregated, all schools, water fountains, movie theaters and everything else as well. Let’s not stop there, let blacks pick out 5 states and let them be only for black people to live in, let’s go all they way with this. That is until another 50 years go by and they change their minds again. I guess separate but equal is the way to go after all. 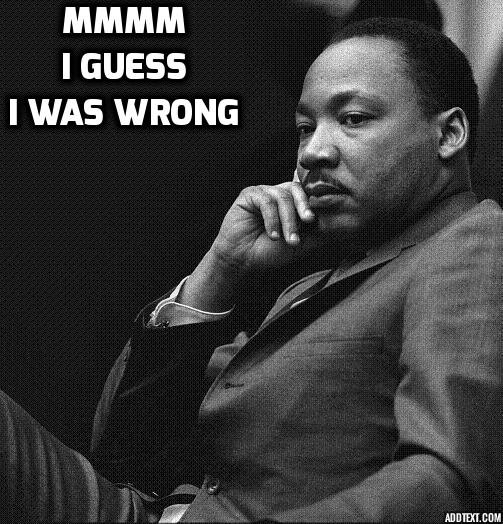 Support Conservative Daily News with a small donation via Paypal or credit card that will go towards supporting the news and commentary you've come to appreciate.
Tags
Martin Luther King Jr segregation