Seven people are confirmed dead and more than 45 others have been hurt, 21 critically, in what British Transport police are referring to as acts of terror involving a knife and a vehicle late Saturday evening. Police have shot 3 terrorists dead and may have killed one innocent bystander by accident. *this is a breaking news story and will be updated as events warrant*

Reports say that 20 people were ‘mowed down’ by a van on the London bridge, several others were stabbed at nearby Borough market. 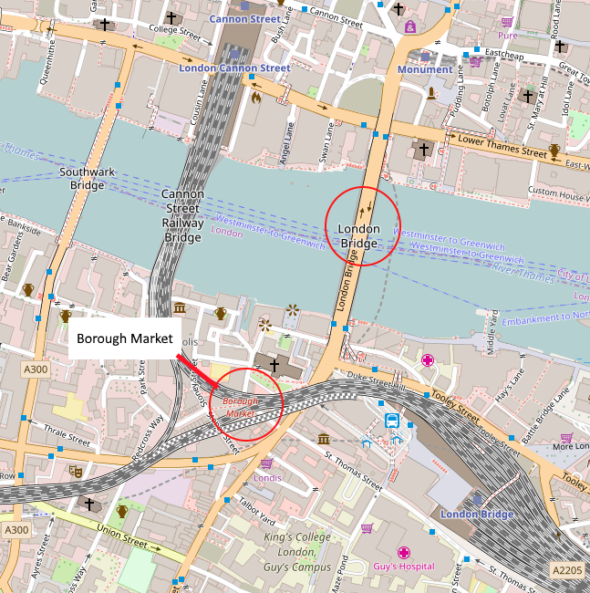 Reports from Britain’s Press Association say that multiple people have been stabbed and that armed officers responding to the incident have fired shots at Borough Market near the London Bridge.

At least one of the dead was shot by police in Borough Market.

Bystander 'shot in the head as police opened fire' on knifemen who targeted drinkers in a London https://t.co/LfT3tSaMPO

A massive manhunt for three men with knives has begun.

Man hunt launched for three terrorists as men with '12in knives stab pedestrians' after mowing down up to 20 people https://t.co/4vkpqDD4JE pic.twitter.com/T4gUxXhFl3

Multiple explosions have been reported and police may have at least one suspect in custody.

Two explosions heard in last few minutes; suspects still at large, at least 1 may have been subdued. #London https://t.co/1AauirJO2E pic.twitter.com/5p36WFwISp

A van ran struck several pedestrians, perhaps as many as 20, on the London Bridge and conflicting reports say that between one and three attackers then jumped out of the vehicle and began stabbing people.

“He’s veered across the road towards the right hand of where Southwark Cathedral is and rammed it where the steps are,” a cabbie in the area said. “He just rammed it towards them, wedged it in between the lamppost and the steps and so he’s hit people there. They’ve jumped out of the van and started stabbing people randomly.”

That same cabbie reportedly turned his cab on the terrorists in an attempt to end the attack. “I’m gonna try and hit him, I’m gonna try and knock him down,” the unidentified cab driver said. “I spun the cab round, I was about to ram one of them, but he side-stepped and three police officers came running towards them with their batons drawn.”

One witness said she saw three people with what appeared to be their throats cut on London Bridge amid the “utter chaos.”

Just come out of Borough Bistro where attack happen – saw man wielding knife and people on the floor in blood. In total shock #LondonBridge

The market is near the London Bridge. A crashed van and men with knives were reported in the area indicating these are likely the same men from the bridge.

The Vauxhall stabbing has now been ruled “not connected” by local police.