The special election in Georgia’s Sixth Congressional District has become the most expensive and most watched House races in history. All Polls close at 7 p.m. EDT except for two precincts in Dekalb County which will close at 7:30 pm.

*This page will update regularly with information so reload it or check back often.*

How did Karen Handel do? County-by-County:

Democrat Jon Ossoff got his butt handed to him by Republican Karen Handel despite the massive amount of California money and and crap ton of Hollywood celebrities dumped on his campaign. He used Hillary’s strategy and got the same result. The DNC must rethink or 2018 will likely add 2-3 House seats for the GOP.

10:20 pm – Cobb County is looking worse for @Ossoff and everything else is favoring @KarenHandel

It’s becoming an easier race to call as more precincts show in favor of the Republican and reject the 30-year-old vlogger as a viable candidate.

9:44 pm – Cobb County snuffs out @Ossoff’s hopes as 65% of votes are reported Ossoff needed at least 43-44% of the vote in Cobb County to have a chance. As election day results come in that number looks increasingly impossible. 9:34 pm – #GA06 totals looking grim for @Ossoff With almot half the vote reported, Cobb has turned more towards Handel and her lead in Fulton has remained unchallenged. Ossoff’s lead in urban Dekalb County may not be enough to sustain him.

9:23 pm – Cobb and Dekalb turn towards Handel as more election day votes get counted It is looking less likely that Ossoff will pull 44% out of Cobb County and he’s losing ground in Dekalb where he has to get at least 61% to have a chance. This might be closer than my +6 Handel prediction, but she’s looking good right now.

8:58 pm – Cobb starts counting election day ballots – not looking good for Ossoff Jon Ossoff needs more than 43%  or more in Cobb to stand a chance and he doesn’t have it so far.

8:42 pm – Dekalb starts counting election day ballots – no change in county results Dekalb’s southern areas are key for Ossoff and so far, he’s pulling them in. If Handel can’t pull in at least 40% of the vote in that county, it could override her support in Cobb. Democrats don’t seem to like the Dekalb numbers. https://twitter.com/StefanTurk/status/877306351365619713

8:35 pm – Election day results start trickling in giving Handel more votes As expected, the election day ballots are showing favor towards Handel. Only Fulton has started counting ballots from today, but it has moved that county 2% more towards the Republican.

8:06 pm – Cobb starts to report – also likely early ballots Cobb County, of which Ossoff needs better than 44% to win, has started reporting results although likely just early voting ballots. Early voting was expected to favor Ossoff and it is showing. In Cobb, he has 45% of the vote from early voting ballots which, if it holds, could indicate a good night for him. Election day voting is expected to heavily favor Handel – it’s going to be a long night.

8:01 pm – The results were seeing… aren’t from today The results so far reported appear to be entirely due to the counting of early voting ballots. No election day votes seem to have been counted yet. This is intriguing as Ossoff was predicted to have a small lead in early voting, but the results say otherwise.

7:48 pm – Results start coming in for County critical to Ossoff Dekalb has started reporting results, but only from the northern sections. They are going, as expected, to Handel. The southern areas, closer to the city of Atlanta, are critical to Jon Ossoff if he hopes to win. Anything under 60% in this county and he’s going to have trouble.

7:35 pm – Ok, now results start trickling in Only Fulton County is reporting so far and slowly so. Handel has started with a lead, but with less than 1% reporting, it’s not indicative. Ossoff will have to perform amazingly in Dekalb County and pull at least 44% in Cobb to have a chance. Over 72,000 votes have been counted so far out of an anticipated 200,000 to 250,000 total.

7:30 pm – Strange happenings on the Ossoff side I… don’t have words so I’ll just let the images do the talking: 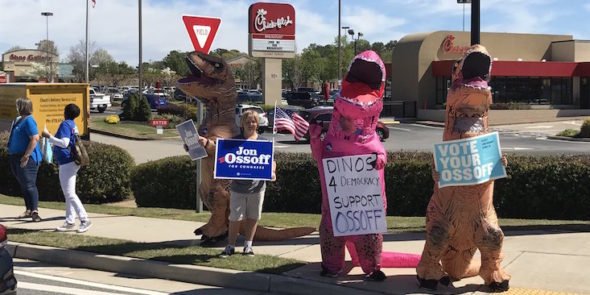 6:00 pm – Starting Coverage, bringing you up to speed The weather is awful in the Atlanta area with thunderstorms forecast to continue past poll closing in just an hour. Dekalb County has extended voting for an additional hour to allow for the rain. Voting has reportedly gone smoothly for most of the day with just two precincts reporting slow check-ins this morning. Dekalb County has extended voting in those precincts for an additional half hour to make up for the issue. Turnout is heavy in a race that has been flooded by outside money on the Democrats side. Some estimates put spending over $59 million with much of it coming from California. if you want to catch on past news for this race, check out our Georgia Special Election Page

Support Conservative Daily News with a small donation via Paypal or credit card that will go towards supporting the news and commentary you've come to appreciate.
Tags
Georgia Jon Ossoff Karen Handel The Georgia Special Election