The White House said in a statement Saturday that the president “cannot imagine that Russia is pleased” after North Korea launched a missile that came down near the Russian coast and demonstrated a jump in their missile technology.

“With the missile impacting so close to Russian soil in fact, closer to Russia than to Japan the President cannot imagine that Russia is pleased,” the statement read. 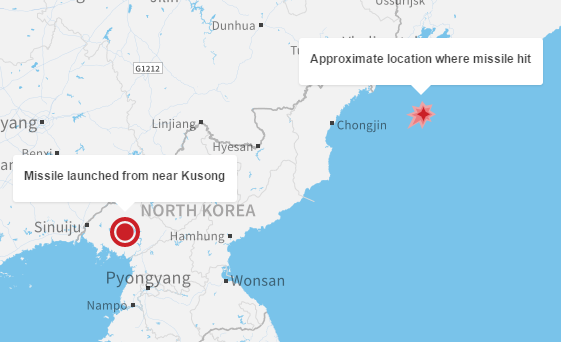 The missile, launched from Kusong just before 6 am local time and splashed down in the East Sea just 60 miles from the Russian port of Vladivostok. The port is a critical economic center and the headquarters of the Russian Navy’s Pacific Fleet.

The White House has not renewed threats of military action. Instead, the statement called for “all nations to implement far stronger sanctions against North Korea.”

North Korea had not launched a missile since April 29th. And this is the first such launch since the election of South Korea’s new president.

“We keep our door open for dialogue with North Korea, but we must act decisively against North Korean provocations so that it will not miscalculate,” President Moon said according to staff. “We must show that dialogue is possible when the North changes its attitude.”

The missile traveled approximately 430 miles. While not far enough to threaten the United States, it shows that Pyongyang has the capability to hit Russia and China.
“It tells Russia, ‘I can touch you too,'” former director of operations at the US Pacific Command’s Joint Intelligence Center Carl Schuster said. “It tells China, ‘I don’t care what you think, I’m independent.'”

China responded to the threat with a call for all parties to remain calm.

“The current situation on the Korean Peninsula is complex and sensitive. All sides should exercise restraint and refrain from taking actions that would further escalate tensions in the region,” a statement from China’s Foreign Ministry.

This launch of the Hwasong-12 is the first successful test of the new missile.

This launch of an intermediate-range delivery system signals the maturing of North Korea’s missile technology. Previous attempts have ended in catastrophic failure shortly after launch and none have reached as far or as high as Sunday’s test.

The missile flew just over 430 miles, but the distance wasn’t nearly as interesting to analysts as the 1,245-mile altitude the weapon achieved. If correct, that is well past the Karman line (62 miles) that represents the boundary between the Earth’s atmosphere and outer space. The extreme altitude also shows that as the North Koreans perfect guidance systems, the missile could go much further and threaten U.S. bases in Japan or on Guam. The average apogee (highest point of a trajectory or orbit) of a modern ICBM is only 750 miles.

North Korea claims that the missile test proves their ability to launch a “heavy nuclear weapon.”

Support Conservative Daily News with a small donation via Paypal or credit card that will go towards supporting the news and commentary you've come to appreciate.
Tags
China North Korea Russia