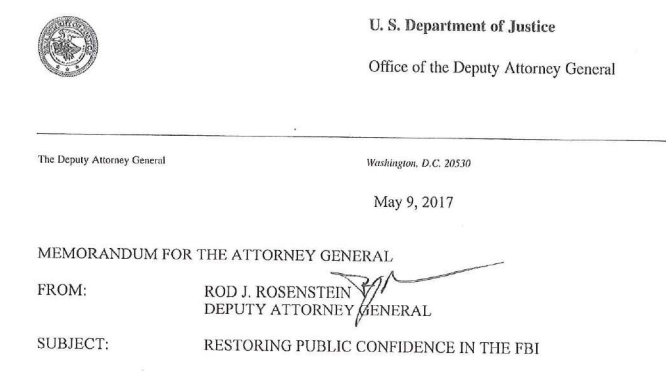 Democrats have spoken publicly of their inability to understand the reasoning behind the firing of FBI Director James Comey. But the case for Comey’s dismissal is clearly made in a memo from Deputy Director Rod Rosenstein.

Director Comey’s decision to publicly release details of a criminal probe are at the center of Rosenstein’s critical memo.

“I cannot defend the Director’s handling of the conclusion of the investigation of Secretary Clinton’s emails,” Rosenstein wrote in his memo entitled Restoring Public Confidence in the FBI. “The Director was wrong to usurp the Attorney General’s authority on July 5, 2016, and announce his conclusion that the case should be closed without prosecution.”

Rosenstein also criticized Comey for ignoring a longstanding principal of the Department of Justice. “We do not hold press conferences to release derogatory information about the subject of a declined criminal investigation.”

Rosenstein’s memo includes several bi-partisan references and comments from prior justice department officials. And all of the remarks show outrage at Comey’s actions.

The director of the FBI reports directly to Rosenstein. And while the memo doesn’t directly demand his termination, it certainly seems to suggest that it should be done.

“The FBI is unlikely to regain public and congressional trust until it has a Director who understands the gravity of the mistakes and pledges never to repeat them. Having refused to admit his errors, the Director cannot be expected to implement the necessary corrective actions.”

Support Conservative Daily News with a small donation via Paypal or credit card that will go towards supporting the news and commentary you've come to appreciate.
Tags
James Comey Rod Rosenstein The Department of Justice the FBI Trump Administration