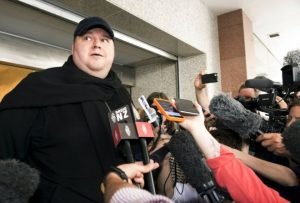 Kim Dotcom issued a statement Tuesday afternoon about his knowledge of Seth Rich and whether Seth was the source for DNC emails released by WikiLeaks.

The statement corroborates, with no proof, information that Rich used the name “Panda” when seeking to remain anonymous. Seth did use panda4progress as a twitter handle and was mildly obsessed with Panda bears, but that was all public information.

The rest of the statement is full of unverifiable facts. At the moment, Kim Dotcom’s statement looks designed to negotiate for immunity from prosecution in his own case. There’s just not much else in the release.

I KNOW THAT SETH RICH WASINVOLVED IN THE DNC LEAK.

I know this because in late 2014 a person contacted me about helping me to start a branch of the Internet Party in the United States. He called himself Panda. I now know that Panda was Seth Rich.

Panda advised me that he was working on voter analytics tools and other technologies that the Internet Party may find helpful.

I communicated with Panda on a number of topics including corruption and the influence of corporate money in politics.

“He wanted to change that from the inside.”

I was referring to what I knew when I did an interview with Bloomberg in New Zealand in May 2015. In that interview I hinted that Julian Assange and Wikileaks would release information about Hillary Clinton in the upcoming election.

The Rich family has reached out to me to ask that I be sensitive to their loss in my public comments. That request is entirely reasonable.

I have consulted with my lawyers. I accept that my full statement should be provided to the authorities and I am prepared to do that so that there can be a full investigation. My lawyers will speak with the authorities regarding the proper process.

Support Conservative Daily News with a small donation via Paypal or credit card that will go towards supporting the news and commentary you've come to appreciate.
Tags
Kim Dotcom Seth Rich